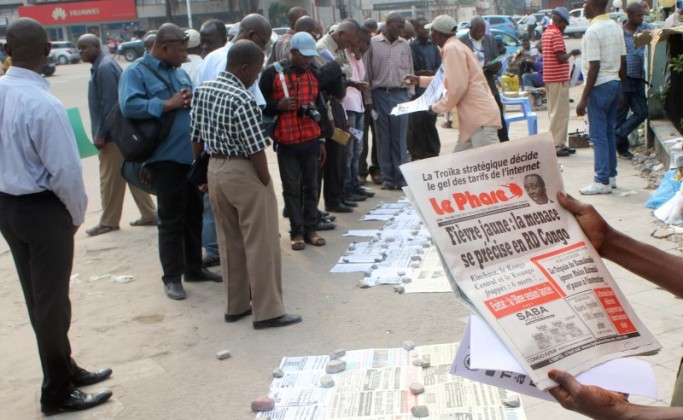 Residents read newspapers with reports of Yellow Fever, along the streets in Kinshasa, capital of the Democratic Republic of the Congo, June 21, 2016. REUTERS/Jean Robert N'kengo

KINSHASA (Reuters) – Democratic Republic of Congo on Monday declared a yellow fever epidemic in three provinces, including the capital Kinshasa, after confirming 67 cases of the disease, with another 1,000 suspected cases being monitored.

Health Minister Felix Kabange said only seven of the proven cases were indigenous to the Central African country, while 58 were imported from Angola, where the outbreak began. A further two cases came from remote forested areas not linked to the current outbreak. Five people in total have died, Kabange added.

“I declare today a localized epidemic of yellow fever in the provinces of Kinshasa, Kongo Central and Kwango,” Kabange told a news conference.

Kinshasa is the primary concern for global health officials since it has a densely-packed population of more than 12 million and poor healthcare infrastructure.

Yellow fever is transmitted by the same mosquitoes that spread the Zika and dengue viruses, although it is a much more serious disease. The “yellow” in the name refers to the jaundice that affects some infected patients.

The global stockpile of vaccines has already been depleted twice this year to immunize people in Angola, Uganda and Congo. It stands at 6 million doses, but this may not be enough if there are simultaneous outbreaks in multiple highly-populated areas, experts warn.

Almost 18 million doses have been distributed for emergency vaccination campaigns so far in the three African countries.

World Health Organisation (WHO) advisers have recommended using a fifth of the standard dose of vaccine in the event of a global shortage – enough to immunize temporarily but not to give lifelong immunity.

“An epidemic in such a large city (as Kinshasa) is always difficult to handle,” said WHO’s Congo representative Yokouide Allarangar.

A vaccination campaign has been staged in two of the city’s health zones deemed as high risk because the virus is circulating but is not linked to imported cases, he said.

“We need to quickly try to contain these zones where the virus circulates to prevent the disease from spreading to other zones,” he said, adding that a million of the city’s residents have been vaccinated so far.

Manufacturers of the vaccine include the Institut Pasteur, government factories in Brazil and Russia as well as French drugmaker Sanofi.

Congo’s outbreak, since January, comes at a time when political tensions linked to an upcoming presidential election and an economic crisis stoked by a slump in global commodity prices is already putting a huge strain on the country’s stability.

President Joseph Kabila is facing opposition, which has sometimes turned violent, amid concerns that he will try to cling to power beyond the expiry of his mandate at year-end.