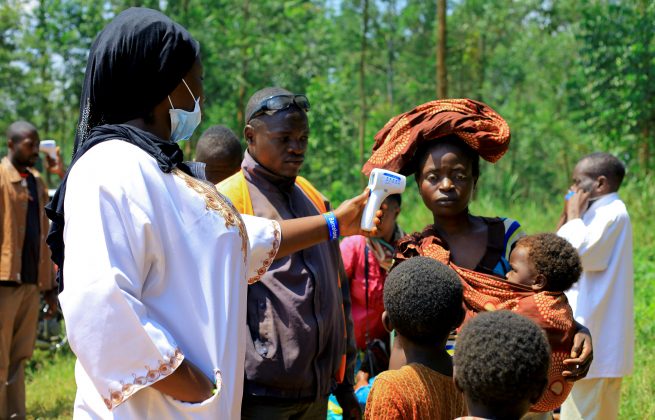 A Congolese health worker checks the temperature of a woman before the launch of vaccination campaign against the deadly Ebola virus near Mangina village, near the town of Beni, in North Kivu province of the Democratic Republic of Congo, August 8, 2018. REUTERS/Samuel Mambo

A Reuters witness on a visit to Mangina, the village in eastern Democratic Republic of Congo where the epidemic was declared, saw health workers in protective suits administering the injections.

So far 43 people are believed to have been infected in North Kivu and Ituri provinces, including 36 who have died, the health ministry said on Tuesday.

“We are putting all our energy and all our expertise to quickly control this epidemic,” Health Minister Oly Ilunga told journalists at the start of the vaccination campaign.

“All the measures of prevention are in place. The vaccination is the last phase. It will enable us to break the chain of transmission of this epidemic.”

More than 900 contacts of those infected have been identified for monitoring, although security is an issue in the area where militia groups operate, WHO said.

The disease, which causes fever, vomiting, and diarrhea, is spread through direct contact with body fluids.

“Around 40 health workers are expected to be vaccinated today; by end of the week, once all the necessary steps are in place, vaccination of community contacts and their contacts will commence,” WHO spokesman Tarik Jasarevic said.

WHO has said that analysis of genetic sequencing showed it was a separate outbreak from the one 2,500 km (1,500 miles) away in the northwest that ended less than two weeks ago after killing 33 people — but the same Zaire strain.

This is Congo’s 10th Ebola outbreak since the virus was first identified near northern Congo’s Ebola river.

“There is a huge fear among the local population,” Kaswera Mathumo, a medical worker at a clinic in Mangina, where the vaccinations were taking place, said.

The experimental vaccine being used, which is manufactured by Merck, proved successful during its first wide-scale usage against the previous outbreak in Equateur Province.

More than 3,000 doses remain in stock in the capital Kinshasa, allowing authorities to deploy them quickly to affected areas.

But they face security challenges in eastern Congo, a region bubbling with conflicts over land and ethnicity stoked by decades of on-off war.

Local authorities announced on Tuesday that 14 bodies had been discovered in the town of Tubameme, about 40 km (25 miles) northeast of the epicenter of the outbreak in the town of Mangina, suspected to have been killed by a militia group.