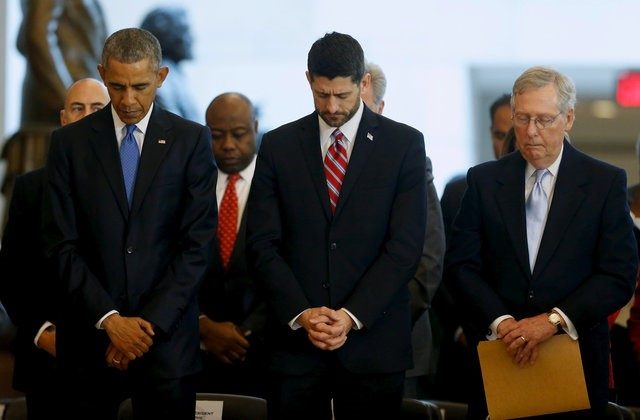 U.S. President Barack Obama (L-R), House Speaker Paul Ryan (R-WI) and Senate Majority Leader Mitch McConnell (R-KY) bow their heads in prayer at the end of a ceremony commemorating the 150th anniversary of the 13th Amendment, which formally abolished slavery in the aftermath of the U.S. Civil War, at the U.S. Capitol in Washington December 9, 2015. REUTERS/Jonathan Ernst/File Photo

WASHINGTON (Reuters) – The U.S. Congress taking office on Tuesday remains almost as overwhelmingly Christian as it was in the 1960s even while the share of American adults who call themselves Christians has dropped, according to Pew Research Center analysis.

A report from the nonpartisan group said that 91 percent of lawmakers in the Republican-dominated 115th Congress described themselves as Christians, down slightly from 95 percent in the 87th Congress in 1961 and 1962, the earliest years for comparable data.

By contrast, the portion of American adults who call themselves Christian fell to 71 percent in 2014, the Pew report said. While Pew did not have numbers for the early 1960s, a Gallup survey from that time found that 93 percent of Americans described themselves as Christian.

“The most interesting thing is how little Congress has changed over the past several decades, especially in comparison with the general public,” Aleksandra Sandstrom, the report’s lead author, said in a telephone interview.

The biggest gap between Congress and other Americans was among those who said they have no religion. Only one lawmaker, Democratic Representative Kyrsten Sinema of Arizona, called herself religiously unaffiliated. The Pew survey found that 23 percent of Americans described themselves the same way.

The percentage of Americans who have no religion has grown, but the portion of voters who said in exit polls that they have no religion is lower than the share of the general public, said Greg Smith, a Pew expert on the U.S. religious landscape.

“The political power of that group might lag their growth in the overall population,” he said.

Among the 293 Republicans elected to the new Congress, all but two identify as Christians. The two Jewish Republicans – Lee Zeldin of New York and David Kustoff of Tennessee – serve in the House.

The 242 Democrats in Congress are 80 percent Christian, but that side of the aisle includes 28 Jews, three Buddhists, three Hindus, two Muslims and one Unitarian Universalist.

The U.S. population in 2014 was 46.5 percent Protestant and 21 percent Catholic, the Pew survey showed.

The survey was based on data gathered by CQ Roll Call through questionnaires and phone calls to members of congress and candidates’ offices.

One thought on “Congress remains overwhelmingly Christian as U.S. shifts”