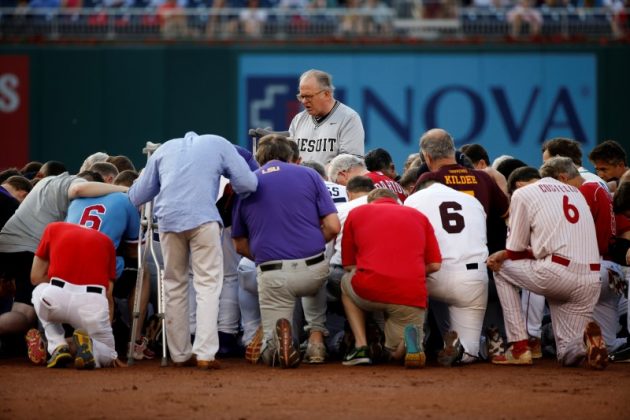 FILE PHOTO: Patrick Conroy, Chaplain of the House of Representatives, leads Democrats and Republicans in prayer before they face off in the annual Congressional Baseball Game at Nationals Park in Washington, U.S., June 15, 2017. REUTERS/Joshua Roberts

WASHINGTON (Reuters) – U.S. House of Representatives Speaker Paul Ryan said late on Thursday that the chamber’s chaplain will remain in his position, after he unexpectedly asked Reverend Patrick Conroy to resign two weeks ago, outraging some lawmakers and the Jesuit priest himself.

Conroy released a letter earlier on Thursday rescinding his abrupt resignation which Ryan, a Catholic and the top Republican in the House, said he had accepted. Conroy’s last day had been scheduled for May 24.

“My original decision was made in what I believed to be the best interest of this institution,” Ryan said in a statement. “To be clear, that decision was based on my duty to ensure that the House has the kind of pastoral services that it deserves. It is my job as speaker to do what is best for this body, and I know that this body is not well served by a protracted fight over such an important post.”

It is unusual for House chaplains to be dismissed, and Democrats said the ouster was tied to a prayer Conroy led during debate over the tax overhaul Republicans passed at the end of last year without any support from the minority party. Ryan and fellow Republicans, however, said the lawmakers needed better pastoral care.

In his statement, Ryan said he would meet with Conroy next week.