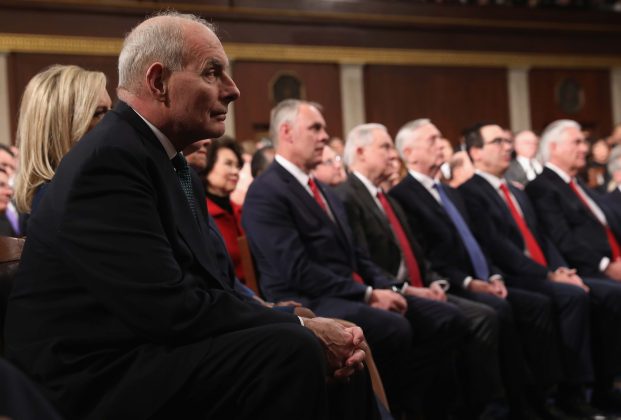 White House Chief of Staff John Kelly listens as U.S. President Donald Trump delivers his first State of the Union address to a joint session of Congress inside the House Chamber on Capitol Hill in Washington, U.S., January 30, 2018. REUTERS/Win McNamee/Pool

“It will be released here pretty quick, I think, and then the whole world can see it,” Kelly said in an interview on Fox News Radio, adding he had seen the four-page document and that White House lawyers were reviewing it.

Kelly’s comments follow Trump’s response to a Republican lawmaker after his State of the Union speech on Tuesday that suggested there was a “100 percent chance” the memo would be made public.

FBI Director Christopher Wray has told the White House the memo contains inaccurate information and offers a false picture, according to Bloomberg News.

White House spokeswoman Sarah Sanders told CNN on Wednesday the memo was still being reviewed and “there’s always a chance” that it would not be released.

The memo has become a lightning rod in a bitter partisan fight over the FBI amid ongoing investigations into alleged Russian meddling in the 2016 U.S. election and any possible collusion by Trump’s campaign, something both Russia and Trump have denied.

Republicans, who blocked an effort to release a counterpoint memo by Democrats on the panel, have said it shows anti-Trump bias by the FBI and the Justice Department in seeking a warrant to conduct an intelligence eavesdropping operation.

The House panel this week voted along partisan lines to release the memo. Trump has until the weekend to decide whether to make it public.

“The priority here is not our national security, it’s not the country, it’s not the interest of justice. It’s just the naked, personal interest of the president,” U.S. Representative Adam Schiff, the panel’s top Democrat, said at an event hosted by the Axios news outlet.

Sanders told CNN Trump had not seen the memo before his address on Tuesday night or immediately afterwards.

The document was commissioned by Representative Devin Nunes, the House committee’s Republican chairman who had recused himself from the panel’s Russia probe.

Sanders said she did not know if Nunes had worked with anyone at the White House on it: “I’m not aware of any conversations or coordination with Congressman Nunes.”