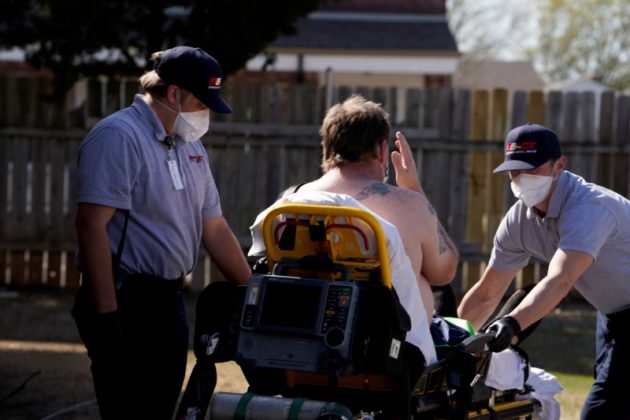 By Gabriella Borter and Nick Brown

NEW YORK (Reuters) – U.S. doctors and nurses on the front lines of the coronavirus outbreak came under increasing stress on Friday as the number of cases skyrocketed and hospital staff were forced to ration care for an overwhelming number of patients.

The United States surpassed two grim milestones on Thursday. The death toll soared past 1,000, reaching 1,261 by the end of the day, and the total number of infections topped 85,000, exceeding the national totals of China and Italy to make the United States the world leader in confirmed cases.

“This is past a movie plot. Nobody could ever think of this, or be totally prepared for this. You’re going to have to wing it on the fly,” said Eric Neibart, infectious disease specialist and clinical assistant professor at Mount Sinai Hospital in New York. “The scale is unbelievable.”

After days of wrangling, the U.S. Congress may soon respond with a $2.2 trillion relief package, reinforcing an extraordinary array of economic measures that the U.S. Federal Reserve rolled out on Monday.

Leaders of the U.S. House of Representatives said they expected to pass the measure on Friday, sending the bill to President Donald Trump, who has promised to sign it.

In addition to aiding hospitals in hot spots such as New York and New Orleans, the package will bring welcome relief to businesses and unemployed workers. With much of the country on lockdown, a record 3.3 million Americans filed jobless claims last week, nearly five times the previous record set during the recession of 1982.

One emergency room doctor in Michigan said he was using one paper face mask for an entire shift due to a shortage and that his hospital would soon run out of ventilators, the machines needed by sufferers of COVID-19, the respiratory disease caused by the virus, to help them breathe.

The doctor, Rob Davidson, urged Trump to use his executive authority to procure more test kits and ventilators.

“We have hospital systems here in the Detroit area in Michigan who are getting to the end of their supply of ventilators and have to start telling families that they can’t save their loved ones because they don’t have enough equipment,” Davidson said in a video he posted on Twitter.

New York Governor Andrew Cuomo has said any realistic scenario about the unfolding outbreak would overwhelm the healthcare system. His state, which has become the epicenter of the U.S. outbreak with more than 37,000 cases and 385 deaths, is scrambling to create more sick beds.

It is looking to convert hotel rooms, office space and other venues into healthcare centers, while setting up a convention center as a temporary hospital. Some hospitals are scrambling to convert cafeterias and atriums into hospital rooms to house intensive care patients.

Mount Sinai hospital had 215 inpatients with COVID-19 as of Thursday.

“The fear is next week we’ll have 400,” Neibart said, expecting a shortage of doctors and nurses.

In lighter moments, Neibart said he and his colleagues joke about claiming their own makeshift spots, for when they inevitably fall ill with the virus, although he said they routinely check on one another’s well being.

COVID-19 claimed the life of Kious Kelly, a Mount Sinai nurse manager whose death has led to an outpouring of remembrances from former colleagues.

“I remember him running crazy, checking on us and making sure we were OK,” Diana Torres, a nurse at Mount Sinai, told Reuters. “He would deliver our messages to administration if we weren’t happy. He wanted good things for us.”

Torres and other colleagues have also infused their tributes with angry messages about the shortage of personal protective equipment (PPE).

“It seems like we are fighting the government, (the hospital) administration and the virus,” Torres said. “We can tackle one, but not all at once.”

The Department of Veterans Affairs may be asked to help in New York, even as it struggles to provide enough staffing and equipment for armed forces veterans.

Maria Lobifaro, a New York intensive care unit (ICU) nurse treating veterans with COVID-19, said staff normally change masks after every patient interaction. Now, they are getting one N95 mask to use for an entire 12-hour shift.

The ratio of patients to nurses in the ICU is usually two-to-one. As of Monday it was four-to-one, she said.

“Right now we can barely handle the veterans that we have,” Lobifaro said.