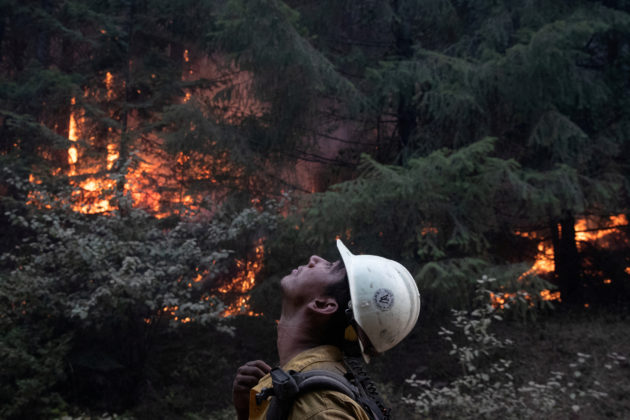 PORTLAND, Ore. (Reuters) – As fire crews continued to battle deadly wildfires sweeping the western United States, thousands of evacuees in Oregon and other states faced a daily struggle while scientists in Europe tracked the smoke on Wednesday as it spread on an intercontinental scale.

With state resources stretched to their limit, President Donald Trump on Tuesday night approved a request from Oregon’s governor for a federal disaster declaration, bolstering federal assistance for emergency response and relief efforts.

The Federal Emergency Management Agency (FEMA) has obligated more than $1.2 million in mission assignments to bring relief to Oregon and has deployed five urban search and rescue teams to the wildfire-torn region, the agency said in a statement on Wednesday.

Search teams scoured incinerated homes for the missing as firefighters kept up their exhausting battle.

The wildfires, which officials and scientists have described as unprecedented in scope and ferocity, have filled the region’s skies with smoke and soot, compounding a public health crisis already posed by the coronavirus pandemic.

Scientists in Europe tracked the smoke as it bore down on the continent, underscoring the magnitude of the disaster. The European Union’s Copernicus Atmosphere Monitoring Service (CAMS) is monitoring the scale and intensity of the fires and the transport of the resultant smoke across the United States and beyond.

“The fact that these fires are emitting so much pollution into the atmosphere that we can still see thick smoke over 8,000 kilometers (4,970 miles) away reflects just how devastating they have been in their magnitude and duration,” CAMS Senior Scientist Mark Parrington said in a statement.

CAMS said it uses satellite observations of aerosols, carbon monoxide and other constituents of smoke to monitor and forecast its movement through the atmosphere.

Firefighters in the San Gabriel Mountains just north of Los Angeles waged an all-out campaign to save the famed Mount Wilson Observatory and an adjacent complex of broadcast transmission towers from flames that crept near the site.