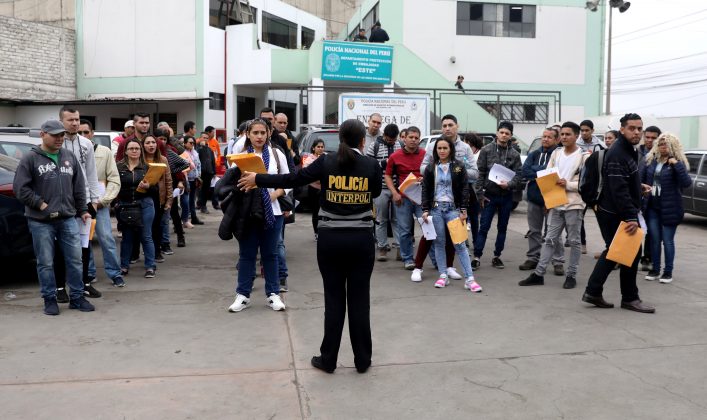 Venezuelan migrants queue to get the needed paperwork for a temporary residency permit at Interpol headquarters in Lima, Peru August 21, 2018. REUTERS/Mariana Bazo

GENEVA (Reuters) – The exodus of migrants from Venezuela is building towards a “crisis moment” comparable to events involving refugees in the Mediterranean, the U.N. migration agency said on Friday.

Growing numbers are fleeing economic meltdown and political turmoil in Venezuela, threatening to overwhelm neighboring countries. Officials from Colombia, Ecuador and Peru will meet in Bogota next week to seek a way forward.

Ecuador and Peru have this month tightened entry rules for Venezuelans, requiring them to carry valid passports instead of just national ID cards. While in Brazil, rioters drove hundreds back over the border.

Describing those events as early warning signs, International Organization for Migration (IOM) spokesman Joel Millman said funding and means of managing the outflow must be mobilized.

“This is building to a crisis moment that we’ve seen in other parts of the world, particularly in the Mediterranean,” he told a news briefing.

On Thursday, the IOM and U.N. refugee agency UNHCR called on Latin American countries to ease entry for Venezuelans, more than 1.6 million of whom have left since 2015.

UNHCR spokesman Andrej Mahecic said on Friday that governments had made “commendable” efforts despite some reception capacities and services being overwhelmed.

But “some disturbing images” had emerged from the region in the past week. “Those increase stigmatization of those who are forced to flee, they put at risk also the efforts for their integration,” he said.