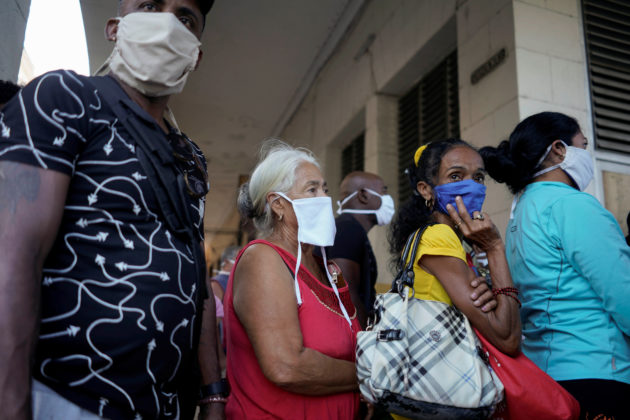 People line up to buy food amid concerns about the spread of the coronavirus disease (COVID-19) outbreak, in downtown Havana, Cuba, April 3, 2020. REUTERS/Alexandre Meneghini

HAVANA (Reuters) – From the seafront capital Havana to the foothills of the Sierra Maestra mountains, Cubans are defying fear of the new coronavirus to search for food as global trade disruptions worsen shortages of basic goods on the Caribbean island.

Residents of all ages are trudging from store to store in the country to locate scarce goods despite recommendations from health experts to stay at home and respect social distancing guidelines to avoid contracting the highly contagious disease.

Communist-run Cuba imports more than 60% of its food, but the pandemic has forced its government to close the borders, denying it the hard currency from tourism needed to pay for goods from overseas. The leisure industry accounts for 25% of the country’s foreign exchange earnings.

With shortages biting, many residents are using apps to swarm shops when coveted products arrive – from chicken and cheese to powdered milk and tomato sauce – creating long lines on the streets of Havana where police attempt to keep order.

While Cuba has faced scattered shortages ever since the collapse of the Soviet Union began in 1989, they have worsened since a decline in aid from socialist ally Venezuela and a tightening of decades-old U.S. sanctions under U.S. President Donald Trump.

Now they are intensifying as the pandemic compounds Cuba’s cash crunch and disrupts international trade and food prices.

“There is a queue for everything, products are scarce,” Havana resident Luis Alberto said as he waited in a line for chicken that stretched for more than 100 meters (330 ft).

Since the first coronavirus cases were logged on the island last month, authorities have closed the borders to people and called on Cubans to only go out if strictly necessary, always wearing face masks. Disinfectant has been included on the ration cards that residents use to obtain goods.

“No one is walking around except the family doctor and nurse,” Nuris Lopez, a hairdresser, said from a medium-sized town in the foothills of the Sierra Maestra in eastern Granma province.

“But when some ground meat finally arrived the other day everyone emerged from their homes in masks and lined up with a policeman keeping order,” she said. 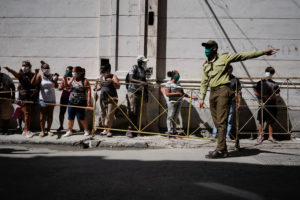 A soldier organizes a line of people to buy food amid concerns about the spread of the coronavirus disease (COVID-19) outbreak, in downtown Havana, Cuba, April 3, 2020. REUTERS/Alexandre Meneghini

President Miguel Diaz-Canel recently warned citizens they would be consuming less imported food “due to the current situation.”

When ships arrived last week with corn and rice, it was big news in the state-run media.

Cuba is not a member of the International Monetary Fund, World Bank or other multilateral lending institutions it could turn to for emergency funds.

Economy Minister Alejandro Gil has said the only solution is to “find in agriculture the main source of food for the people” but the sector is suffering an intensifying lack of inputs – like fertilizer and pesticides – partly due to U.S. sanctions.

“There is a perfect storm brewing. By May, the food situation here will be much worse,” a local agricultural expert said, requesting anonymity due to restrictions on talking with foreign journalists.

Cuba is famous for fighting epidemics and infamous for its centralized and unproductive Soviet-style agricultural system long since jettisoned by other Communist-run countries.

Many express faith in the former and not the latter.

“Cuba has the virus under control and I am sure it will stay that way,” said Emandez Maseo, a teacher in eastern Cuba. “At the same time, we are going into a critical situation, there is nothing in the markets and it is getting worse.”

Cuba has reported 396 coronavirus cases and 11 deaths, all but a few linked to travelers entering from abroad.

Much of the economy not related to tourism remains open, but it is hard to see agricultural production making up for lower imports.

Just 40% of normal fuel supplies and even less fertilizer and pesticides were used for the winter crop, according to the government. Planting began before the pandemic in November and harvesting ended in March.

The government has not reported on the results of Cuba’s most important growing season. Agriculture ministry official Yojan García Rodas told local radio that farmers were able to plant less than half the planned acreage of beans – a local staple – because they had to use oxen to till the land due to lack of fuel.

Speaking about a plague that wiped out much of the crop, Rodas said only 15% of the 22,000 hectares (54,000 acres) planted could be protected by chemical pesticides.

Luis Enrique Plutin, a farmer working the fields under a hot sun with fellow cooperative members on the outskirts of Havana, was phlegmatic.

“Through sacrifice and work we can produce something, but not much, for the population,” he said. “And we can continue to produce more, but imagine the difficulties we have.”