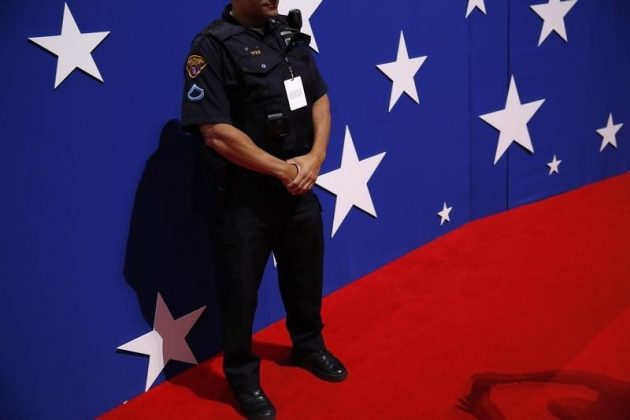 A police officer stands guard on the floor during the final day at the Republican National Convention in Cleveland, Ohio, U.S. July 21, 2016. REUTERS/Mark Kauzlarich

CLEVELAND (Reuters) – Cleveland police would face new limits on the use of force under proposals issued on Thursday by a group charged with monitoring the city’s police department, after a U.S. Justice Department report highlighted abuses by some of its officers.

The report came just weeks after Tamir Rice, aged 12, was shot and killed by a rookie Cleveland police officer in November 2014, triggering national outrage over another case involving a young African-American who died at the hands of police.

Rice was shot after a 911 caller reported someone waving a gun outside a city recreation center. Investigators later determined he had been in possession of a replica-type gun that shot pellets, not bullets.

Changes proposed by the Cleveland Police Monitoring Team – a group of 17 national experts and community activists – include a requirement that officers use de-escalation tactics before resorting to force, such as creating distance from the threat involved.

Officers would also be required to provide medical aid, rather than just request aid, for anyone injured after the use of force. Cleveland officers were roundly criticized for waiting eight minutes before providing first aid to the wounded Rice, who died a day after he was shot.

Cleveland police did not carry first-aid kits at the time of Rice’s death, a policy that has changed since then.

Officers would also be barred from using chokeholds or force against suspects already handcuffed under the monitoring team’s proposals, and prohibited from putting themselves in harm’s way in a manner that might then require the use of deadly force.

A Cleveland police officer who was in the path of an oncoming vehicle, after a high-speed car chase in 2013, shot the first in a barrage of 137 rounds fired by 13 officers that killed the man and woman in the car.

The proposals from the Cleveland Police Monitoring Team are still subject to public comment this month. If approved by a judge and federal officials, they would take effect sometime early next year, according to Matthew Barge, the oversight consent decree monitor.