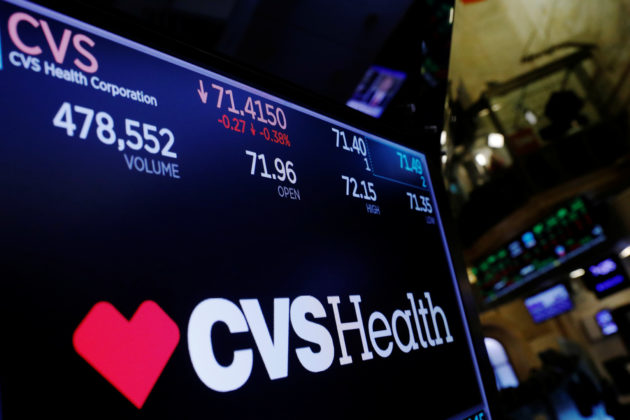 FILE PHOTO: A logo of CVS Health is displayed on a monitor above the floor of the New York Stock Exchange shortly after the opening bell in New York, U.S., December 5, 2017. REUTERS/Lucas Jackson

(Reuters) – CVS Health Corp , called on by the Trump administration last month to help test Americans for infections from the new coronavirus, said it was launching two offsite testing locations with Abbott Laboratories’ faster diagnostic kit and would be able to handle 1,000 tests per day.

Testing for COVID-19, the serious respiratory illness cased by the new coronavirus, has been held back by a lack of test kits and other equipment. While more than 300,000 people in America have tested positive for the new coronavirus, officials believe a shortage of kits has undercounted cases.

Testing, including at drive-through sites like these, is also seen as a key component for U.S. workers and restarting the economy as most states have ordered many non-essential businesses to close.

Executives from Walmart In, Walgreens Boots Alliance Inc  and Target Corp also said in March as part of the government announcement that they would start this testing.

In recent weeks, CVS and Walgreens had said that they each had a pilot site running.

CVS’ two new drive-through COVID-19 testing sites in Georgia and Rhode Island will use the new Abbott tests, which can work in 15 minutes, and that up to four more locations to follow.

“We want to get some experience under our belt with these sites and understand exactly sort of what the volume looks like,” CVS Chief Medical Officer Troy Brennan said in an interview.

Brennan said the company expects to announce a third testing site in a different state on Tuesday and could launch up to three more sites afterward.

CVS will supply personnel from its MinuteClinic unit to oversee the testing. The states will provide security and protective equipment.

The testing is currently available at no cost to patients and is being paid for by the federal government, CVS said.

Walgreens said last week on a conference call with analysts that it had a pilot running in Chicago that was doing about 150 tests a day under the direction of the government. Target said in March that because CVS handled the pharmacy operations in its stores, it would partner with them to bring any sites online.