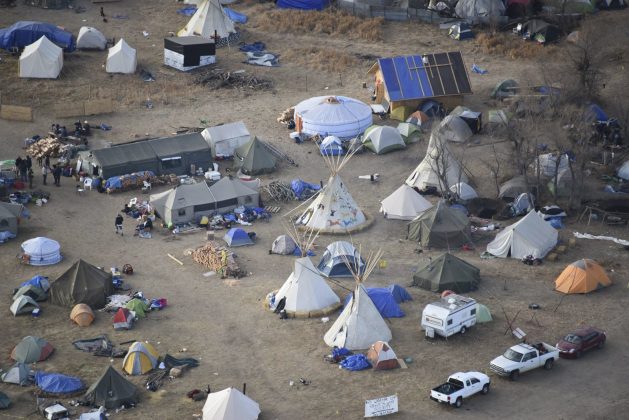 CANNON BALL, N.D. (Reuters) – The September decision by the Obama administration to delay final approval for the Dakota Access Pipeline was intended to give federal officials more time to consult with Native American tribes that have faced dispossession from lands for decades.

But the delays have also caused increased consternation among company officials and led to growing violence between law enforcement and protesters, with both sides decrying the actions of the other in recent days.

Energy Transfer Partners LP’s <ETP.N> $3.7 billion Dakota Access project has drawn steady opposition from environmentalists and Native American activists, led by the Standing Rock Sioux tribe. Their tribal lands are adjacent to the Missouri River, where federal approval is needed to tunnel under a 1-mile (1.6 km) stretch to complete the pipeline.

The activist movement has grown steadily since the tribe established Sacred Stone Camp in Cannon Ball, North Dakota, in April, a temporary site founded as a point of resistance to the pipeline. The movement has remained strong even as temperatures have turned frigid.

The most violent clashes took place over this past weekend. Police used water hoses in below-freezing temperatures to keep about 400 protesters at bay, a move criticized by activist groups, the American Civil Liberties Union and elected officials concerned about freedom of expression and the escalation of violence.

“Almost the entire camp was in shock,” Salim Matt Gras, 64, of Hamilton, Montana, said at the main camp. “They talk about using non-lethal weapons, but when you’re talking about soaking people with freezing water in frigid temperatures, that’s life-threatening.”

Morton County has said violent protesters have overshadowed the peaceful action by other activists. Police said they had recovered improvised weapons from the scene of the protest including slingshots and small propane tanks rigged as explosives.

“We can use whatever force necessary to maintain peace,” said Jason Ziegler, police chief in Mandan, North Dakota, near Cannon Ball, in a statement Monday. He said the use of water is “less than lethal” compared with protesters’ use of slingshots and burning logs.

Both protesters and law enforcement have released statements this week detailing injuries suffered by police and activists, with each side accusing the other of ratcheting up tensions.

Sophia Wilansky, 21, of New York City, was struck on her left arm by a crowd-control grenade fired by police on Monday, according to a statement from Standing Rock’s Medic and Healer Council. A spokeswoman for Hennepin County Medical Center in Minneapolis, where Wilansky was taken, confirmed she was in serious condition.

North Dakota officials said the explosion that injured the woman was still under investigation, but injuries to her arm were not the result of any tools or weapons used by law enforcement. They cited the recovery of three propane canisters at the site of the explosion.

There is still no official timeline for approval of the project. The pipeline, set to run 1,172 miles (1,885 km) from North Dakota to Illinois, was delayed in September so the U.S. Army Corps of Engineers could re-examine permits that would allow construction under the river.

On Nov. 14, final approval was delayed again for additional consultation. That set off executives from Texas-based Energy Transfer Partners, which asked a U.S. district court to declare the project had the legal right to move forward and needed no further approvals. It said the delays were part of a “sham process.”

While President Barack Obama has said the pipeline could be re-routed, ETP chief executive Kelcy Warren has rejected that possibility, adding he is confident the pipeline will be approved once President-elect Donald Trump, who has been supportive of pipeline projects, takes office in late January.

Two weeks ago, on Election Day, ETP said it was moving equipment to the edge of the Missouri River, and would “commence drilling activities” within two weeks of the move’s completion. That, too, was seen as a provocation by protesters.

The delays have alarmed elected officials in North Dakota. Governor Jack Dalrymple has urged federal officials to resolve the permitting process and asked for additional support from federal law enforcement. A spokesman for the governor also blamed federal officials for allowing protesters to camp without a permit on federal property.

“They’re shirking their responsibility here and I don’t believe that they fully appreciate the seriousness of what we’ve got here,” spokesman Jeff Zent said of the federal government.

John DeCarlo, associate professor of criminal justice at the University of New Haven in Connecticut, said the state needs to take a more active stance or the situation could deteriorate.

“They have to stop and realize that this is going to take mediation, not force. There’s no good that could come out of police using force against indigenous peoples and others who are protesting,” said DeCarlo, who is also a former police chief.

Dave Archambault II, chairman of the Standing Rock Sioux, has for several months asked activists to refrain from violence. On Monday, he did not denounce their actions entirely, saying he believes law enforcement is trying to escalate violence.

“Any time you’re backed into a corner, you react,” he said.