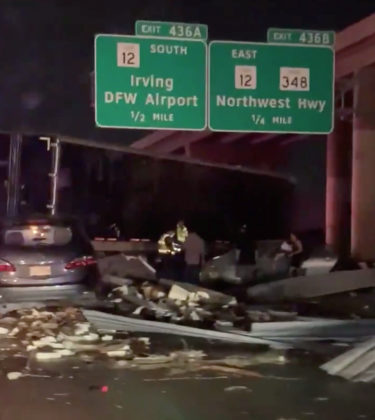 A street is seen in the aftermath of a tornado in Dallas, Texas, U.S., October 20, 2019 in this screen grab obtained from a social media video on October 21, 2019. IVY AWINO/via REUTERS

Three people were reported hospitalized with non-life-threatening injuries after the Sunday storm ripped through north Dallas with maximum wind speeds of 140 mph (225 kph), according to the National Weather Service.

Emergency management workers went door to door in areas such as Preston Hollow and Richardson, checking homes without roofs or crushed by fallen trees, tagging structures with orange spray paint.

“#DallasTornado you took my job! my school!” one Twitter user, Monica Badillo, posted, along with images of shattered windows and debris at Primrose School in Preston Hollow, where she said she worked.

The Dallas Police Department (DPD) asked residents to stay indoors between 7 p.m. and 7 a.m. and told non-residents to stay out of areas where the twister left a miles-long swath of destruction.

“DPD is urging residents to remain vigilant and not enter the impacted areas for their own safety,” the department said, adding it had received reports of looting that had so far turned out to be false.

Dozens of residents were expected to spend the night at a leisure complex turned into a shelter near Love Field Airport, city authorities said.

The winds were powerful enough to cave in a Home Depot <HD.N> do-it-yourself store, leaving a mangled mess of ceiling beams.

Fire rescue officials said it would take another day to make a final assessment of the destruction, with less than half of the affected area checked by nightfall.

About 42,000 people were without power by Monday evening, according to utility firm Oncor, which pressed helicopters and drones into its effort to find and fix damaged lines.

Some residents should prepare for a possible multi-day outage as destroyed electric equipment is rebuilt, it added.

Although no fatalities were reported in the Dallas area, severe storms were blamed for at least three deaths in Oklahoma and one in Arkansas, state authorities said.