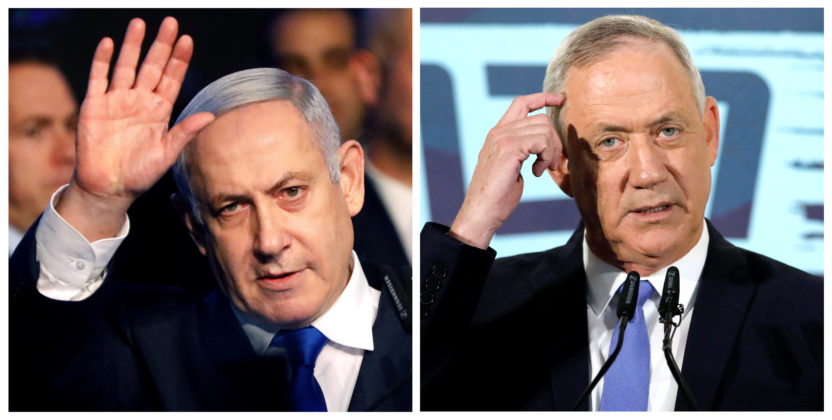 JERUSALEM (Reuters) – Israel’s president told lawmakers on Thursday to name a candidate to form a new government after Prime Minister Benjamin Netanyahu and challenger Benny Gantz both failed, a move that probably sets the stage for a third election within a year.

“These are harsh dark days in the annals of the State of Israel,” President Reuven Rivlin said as he announced that the centrist Gantz had failed to muster enough support for a stable coalition following an unsuccessful attempt by the conservative Netanyahu.

During a 21-period mandated by law, Knesset legislators can nominate anyone in the 120-seat assembly to form a government.

If that fails, an election is triggered within 90 days, sending voters back to the polls for the third time within a year after inconclusive elections in April and September.

The prolonged stalemate comes at a tricky time for Israel on the domestic and international fronts.

Its conflict with arch foe Iran has deepened – Israeli warplanes hit Iranian targets in Syria on Wednesday after rockets were fired toward Israel – while the Palestinian issue remains unresolved as violence has flared anew.

Netanyahu’s caretaker cabinet has been unable to plug a gaping hole in government finances and the deficit has swelled over the past year. Relations between Israel’s Jewish majority and its Arab minority, and those between secular Israelis and ultra-Orthodox Jews are also at issue.

For Netanyahu, not securing another term as prime minister also has legal implications. It may increase his vulnerability to possible indictment on corruption charges. Under Israeli law, a sitting prime minister does not have to step down if charged.

Gantz and Netanyahu had looked at a power-share within a national unity government after they came neck-and-neck in both elections. But disputes about details, such as the timeline for rotating the premiership between them, were not resolved.

Turning to lawmakers on Thursday, Rivlin said: “In the coming 21 days, there will be no ‘bloc’ or ‘party’. Each and every person will sit alone with their conscience and will have to answer one question: What is my duty toward the State of Israel?”

Within Netanyahu’s right-wing Likud Party there were stirrings of internal dissent, with two of its 32 lawmakers saying they would now favour a leadership contest.

Many citizens voiced resignation and rancour at a deadlock that has deepened worries over economic and national security matters.

“We’ve had enough of you! Let us know when you make a decision,” read the top headline on the mass-circulation Israel Hayom, alongside pictures of Netanyahu and Gantz as well as Avigdor Lieberman, a far-right political kingmaker.

“It’s all about Bibi (Netanyahu) trying to escape jail and you know, we are all in trouble because of his personal problem,” said Nahum Tevet, a 72-year-old Tel Aviv artist.

“He should just step out and leave us alone, to be a normal state again, to have a normal government, to take care of all the problems – the social problems, political problems, economic problems – and God help us.”

One thought on “‘Dark days’ in Israel after PM and rival fail to form government, election looms”