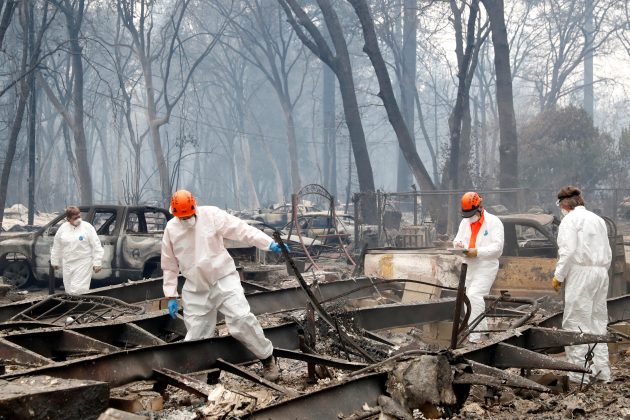 A volunteer search and rescue crew from Calaveras County comb through a home destroyed by the Camp Fire in Paradise, California, U.S., November 13, 2018. REUTERS/Terray Sylvester

By Noel Randewich and Sharon Bernstein

PARADISE, Calif. (Reuters) – Convoys of fire engines rumbled through the smoldering northern California town of Paradise on Tuesday on their way to combat still-active sections of the state’s deadliest and most destructive wildfire in history, which grew by 8,000 acres.

Teams of workers wielding chainsaws cleared downed power lines and other obstacles from the streets, while forensics teams mobilized to resume their search for human remains in the charred wreckage of the Butte County town of 27,000, which was almost completely consumed by fire last Thursday, just hours after the blaze erupted. 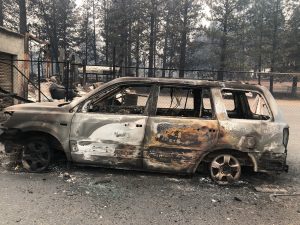 The “Camp Fire” continued to rage in Butte County, about 175 miles (280 km) north of San Francisco, and expanded to 125,000 acres (50,500 hectares), more than four times the area of the city, the California Department of Forestry and Fire Protection (Cal Fire) said. It was 30 percent contained.

The death toll stood at 42 people, the most on record from a California wildfire. More than 7,600 homes and other structures burned down, also an all-time high.

Some 228 people are still unaccounted for and listed as missing. Officials asked relatives and friends to keep checking with evacuation shelters and call centers in the hope many of them could be located.

On a residential street in Paradise lined with burned down houses, a team of 10 rescue and forensic workers wearing white suits and helmets used a dog to search for victims.

“Look for skulls, the big bones,” one forensics worker said to others as they used metal poles and their hands to sift through the remains of a house.

Another found a firearm and marked it for later removal.

Across the street, two rescue workers in red led a dog around a burnt-out car and through the foundation of a house.

One hundred fifty search-and-recovery personnel were due to arrive in the area on Tuesday, bolstering 13 coroner-led recovery teams in the fire zone, said Butte County Sheriff Kory Honea. 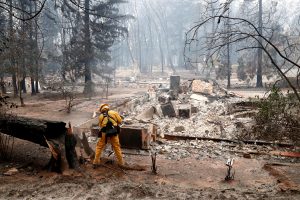 A firefighter extinguishes a hot spot in a neighborhood destroyed by the Camp Fire in Paradise, California, U.S., November 13, 2018. REUTERS/Terray Sylvester

Some 52,000 people remained under evacuation orders and 8,700 firefighters from 17 states have been battling the wildfires.

In Southern California, two people died in the separate “Woolsey Fire,” which has destroyed 435 structures and displaced about 200,000 people in the mountains and foothills near Southern California’s Malibu coast, west of Los Angeles.

The Woolsey Fire was 35 percent contained, up from 30 percent a day earlier, Cal Fire said.

The fires in Los Angeles and Ventura counties burned 96,000 acres (39,000 hectares), roughly the size of Denver and the largest in the area’s 100-year recorded history, officials said, even though air tankers have dropped nearly 1 million gallons (37,000 hectoliters) of fire retardant and 22 helicopters have dropped 1.5 million gallons of water on the fire.

“It is truly heartbreaking,” Los Angeles County Sheriff Jim McDonnell told a news conference. “Hundreds (of homes) still sit in ruins. We fully understand that each house is a home.”

Los Angeles County Fire Chief Daryl Osby said he was hopeful that forecast rainfall next week would help, though it might also provoke landslides.

Four communities were reopened to previously evacuated residents, a sign that firefighters were getting the upper hand, Osby said.

He struck a more sympathetic tone while speaking from the White House on Tuesday.

“We mourn the lives of those lost and we pray for the victims,” Trump said while thanking first responders. “We will do everything in our power to support and protect our fellow citizens in harm’s way.”

For a graphic on Deadly California fires, see – https://tmsnrt.rs/2Plpuui