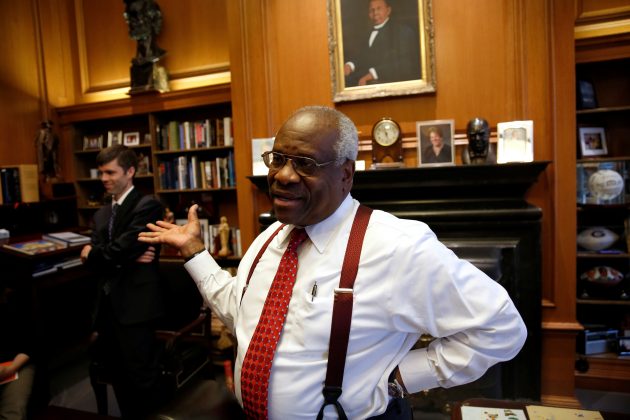 WASHINGTON (Reuters) – The U.S. Supreme Court’s internal divisions over the death penalty were on full display again on Monday in fresh wrangling over how the justices handled recent attempts by two convicted murders in Alabama and Texas to put off their executions.

In both cases, there are signs that tensions over the death penalty – especially skepticism by the court’s conservative majority over last-minute bids by death row inmates to block executions – are coming to a boil after simmering for years.

In the Alabama case, Justice Clarence Thomas, one of the nine-member court’s five conservatives, wrote a 14-page opinion defending its middle-of-the-night April 12 decision to pave the way for the execution of Christopher Price, 46. The court’s order was released too late for Price’s scheduled execution to be carried out, and he remains on death row.

Minutes later, the court issued a new opinion by conservative Justice Samuel Alito criticizing its March 28 decision to issue a stay of execution for Texas inmate Patrick Murphy after the state had blocked a Buddhist spiritual adviser from accompanying him to the execution chamber.

Thomas, whose opinion was joined by Alito and fellow conservative Justice Neil Gorsuch, took aim at liberal Justice Stephen Breyer, a frequent critic of the death penalty. Breyer wrote a dissenting opinion from the Price decision that was joined by the court’s three other liberals.

Price had a weak legal argument, Thomas wrote, meaning “it is difficult to see his litigation strategy as anything other than an attempt to delay his execution. Yet four members of the court would have countenanced his tactics without a shred of legal support.”

Breyer is the most vocal critic of the death penalty on the Supreme Court, questioning the constitutionality of capital punishment and arguing that it is imposed arbitrarily and differently in various parts of the country.

In the April vote, the court reversed two lower court decisions that delayed Price’s execution so he could proceed with his request to be executed by lethal gas instead of lethal injection. The Thomas opinion on Monday was issued as the court rejected Price’s underlying appeal.

Price was convicted and sentenced to death in 1993 in the 1991 killing of William Lynn, a minister, in his home in Bazemore, Alabama.

In the Texas case, Alito said Murphy waited too long to bring his claim and that the court’s action to delay his execution would encourage others to bring similar last-ditch actions. Murphy, a Buddhist, had argued his religious rights under the Constitution were violated by the state.

“This court receives an application to stay virtually every execution; these applications are almost all filed on or shortly after the scheduled execution date; and in the great majority of cases, no good reason for the late filing is apparent,” Alito wrote.

Alito said Murphy’s religious claim might have merit, but prisoners must file such lawsuits “well before their scheduled executions.”

Murphy was serving a 50-year sentence for aggravated sexual assault when he and six other inmates broke out of prison in 2000 and went on a rampage in which a police officer was killed.

A month before the Supreme Court’s Murphy decision, the justices voted 5-4 to allow an execution in Alabama to proceed and denied a request by the condemned inmate, a Muslim, for an imam’s presence in the execution chamber. Alito voted to deny both requests.

Gorsuch also complained about last-minute execution challenges when the court ruled on April 1 against Missouri death row inmate Russell Bucklew, who had sought to die by lethal gas rather than lethal injection because of a rare medical condition. Gorsuch said the Constitution’s ban on cruel and unusual punishment “does not guarantee a prisoner a painless death.”