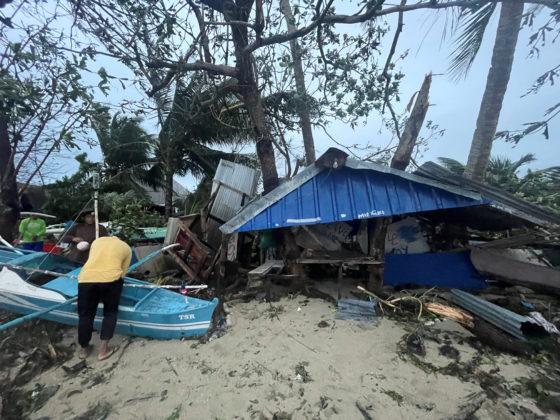 MANILA (Reuters) – The death toll from a typhoon that slammed into the Philippines rose to 12 on Friday, and its president feared it could climb further as authorities assess the devastation caused by one of the strongest tropical storms to hit the country this year.

President Rodrigo Duterte said he would visit battered central and southern areas on Saturday to see the extent of damage, as the government tried to figure out how much it could raise for the disaster response.

“I’m not so much worried about damage to structures,” Duterte said in a televised briefing with disaster officials.

“My fear is if many people died. I am as eager as you to go there to see for myself,” he told Ricardo Jalad, undersecretary at the disaster agency.

Jalad said the death toll was preliminary and he was awaiting information from provincial units before a complete damage assessment could be made.

Most of the reported deaths were due to fallen trees and drowning.

Typhoon Rai, which saw winds of up to 195 km (121 miles) per hour before making landfall on Thursday, displaced more than 300,000 people, damaged homes and toppled power and communication lines, complicating the disaster response.

Rai at one point intensified into a category 5 storm, the highest classification, but later weakened and was due to exit the Philippines by Saturday. The country sees on average 20 typhoons a year.

“It is not expected to cause massive damage compared to typhoons of the same strength previously,” said Casiano Monilla, assistant secretary at the Office of the Civil Defense.

“Families are trapped on rooftops now,” he told DZBB radio.

The typhoon, the 15th to strike the archipelago this year, saw dozens of flights cancelled and paralyzed operations at several ports, leaving about 4,000 people stranded.

Authorities also postponed a mass vaccination drive in most regions.