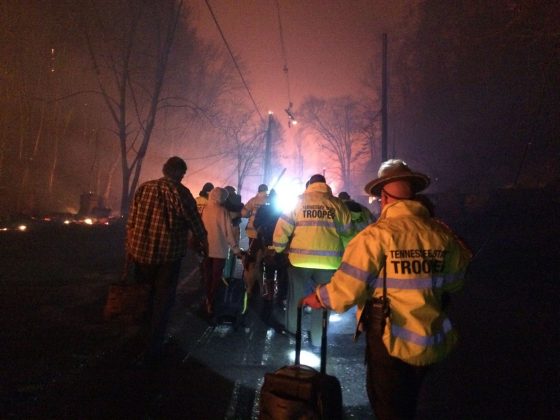 Nov 30 (Reuters) – The death toll from wildfires blazing in and around the Great Smoky Mountains National Park in Tennessee rose to seven on Wednesday even as drenching rains helped firefighters suppress flames that have left whole neighborhoods in ruins.

The tally of documented property losses from the fires also climbed to more than 700 structures damaged or destroyed throughout Sevier County, including at least 300 in the resort town of Gatlinburg.

On Tuesday, authorities reported about 150 structures damaged or destroyed by fire.

In one piece of good news, Sevier County Mayor Larry Waters told a late afternoon news conference on Wednesday that three people who were trapped by the fire were safely rescued, treated at a local hospital and released.

He gave no details about the circumstances of their rescue.

But three more bodies were recovered earlier in the day, bringing the number of confirmed fatalities from the disaster to seven, but none of the victims had been positively identified, he said.

Mandatory evacuation orders remained in effect for some 14,000 people in and around Gatlinburg, along with a dusk-to-dawn curfew for the city, known as the “gateway to the Great Smoky Mountains.”

But nearly all of the estimated 500 people forced from their homes in the nearby town of Pigeon Forge were allowed to return, according to fire department spokeswoman Trish McGee. Pigeon Forge is home to country music star Dolly Parton’s theme park, Dollywood, which suspended operations through Wednesday.

The Great Smoky Mountains National Park was likewise closed to the public due to extensive fire activity and downed trees.

The so-called Chimney Top fire, the principal blaze menacing the area, exploded in the national park on Monday evening as wind gusts reached nearly 90 miles per hour (145 km per hour), spreading the flames through drought-parched trees and brush
into surrounding homes and businesses.

By Wednesday afternoon, the fire zone had scorched an estimated 15,700 acres, but firefighters made considerable progress in containing the blaze, helped by steady showers that drenched the area Tuesday night into Wednesday.

“We’re thankful to the big guy up above for that rain, that’s for sure,” Waters said.

Gatlinburg Fire Chief Greg Miller said many of his crews were busy on Wednesday helping clear downed power lines, mudslides and other debris from roadways to allow search teams and recovery crews into more remote areas of the fire zone.

President Barack Obama spoke on Wednesday with Tennessee Governor Bill Haslam to express condolences for lives lost and his sympathies for those displaced and injured, and to offer any support needed, according to the White House.