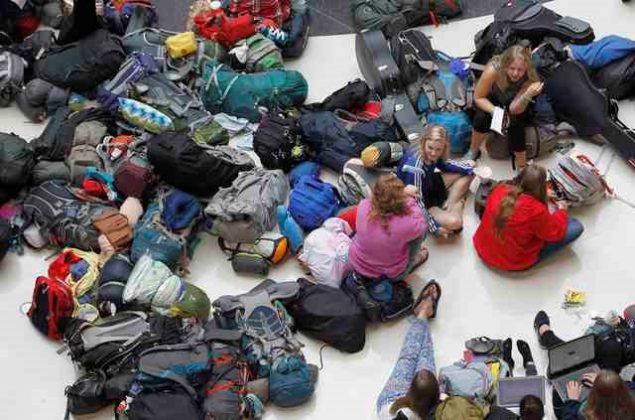 Members of the mission group Adventures In Missions wait to find out if their flight to Guatemala is on time or cancelled after Delta Air Lines' computer systems crashed on Monday, grounding flights around the globe, at Hartsfield Jackson Atlanta International Airport in Atlanta, Georgia, U.S. August 8, 2016. REUTERS/Tami Chappell

(Reuters) – Delta Air Lines  said it was canceling some 300 flights on Tuesday morning, higher than an earlier estimate of 250, as the carrier worked to restore operations after a power outage hit its computer systems on Monday.

The company, which has not yet given details about the financial impact of the outage, said it expected additional delays and cancellations.

The airline canceled around 1,000 flights on Monday, stranding passengers at airports around the globe.

“We were able to bring our systems back on line and resume flights within a few hours yesterday but we are still operating in recovery mode,” Delta, the No.2 U.S. airline by passenger traffic, said on Tuesday.

Customers traveling on Tuesday should check the status of their flight at delta.com or the Fly Delta App, the company said.

Delta Chief Executive Ed Bastian apologized to customers on a video posted on the company’s website and said the company was working round the clock to restore its systems.

The problems arose after a switchgear – which helps control and switch power flows like a circuit breaker in a home – malfunctioned for reasons that were not immediately clear, according to Georgia Power, a unit of Southern Co, which provides electricity to most counties in Georgia.

Atlanta-based Delta said it would offer compensation to customers affected by significant delays or cancellations. The company said it would provide $200 in travel vouchers to all customers who experienced a delay of greater than three hours or a canceled flight.

Delta shares were little changed at $37.75 in premarket trading on Tuesday.

(Reporting by Rachit Vats and Sayantani Ghosh in Bengaluru; Editing by Kirti Pandey)