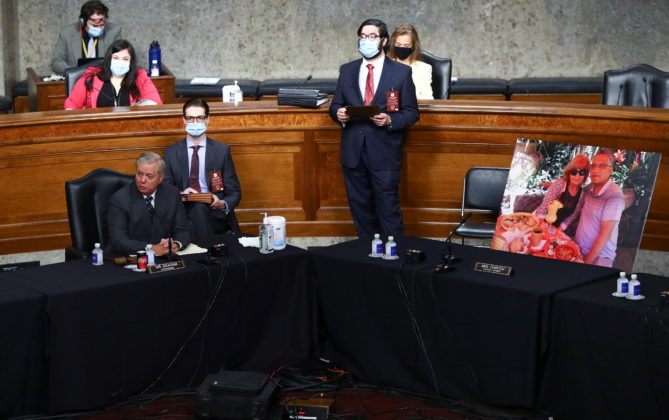 U.S. Senate Judiciary Committee Chairman Lindsey Graham (R-SC) presides next to an image of people who've been helped by the Affordable Care Act (ACA) occupying the seat of Ranking Member Senator Dianne Feinstein (D-CA), who along with fellow Democratic committee members boycotted the Senate Judiciary Committee meeting on the nomination of Judge Amy Coney Barrett to be an associate justice of the U.S. Supreme Court, on Capitol Hill in Washington, U.S., October 22, 2020. REUTERS/Hannah McKay/Pool

By a 12-0 vote, the panel approved Barrett with all Republican members voting yes and the 10 committee Democrats boycotting the meeting after calling the confirmation process a sham. With Trump’s fellow Republicans holding a 53-47 Senate majority, Barrett’s confirmation appears certain.

Judiciary Committee Chairman Lindsey Graham said the Democratic boycott was “their choice,” adding, “We’re not going to allow them to take over the committee.”

The empty seats for the Democratic committee members had posters placed upon them for the meeting with photographs of people who they argue would be hurt if the Affordable Care Act healthcare law, also known as Obamacare, is struck down as Trump has sought in a case to be argued before the justices on Nov. 10.

Barrett has criticized previous rulings upholding Obamacare but said during her confirmation hearings she has no agenda to invalidate the measure.

The confirmation of Barrett, a federal appeals court judge whose confirmation, would expand the top U.S. judicial body’s conservative majority to 6-3.

Calling the committee vote “a groundbreaking historic moment,” Graham said of Barrett: “The ‘law of Amy’ will not be applied to a case in controversy. It will be the law as written in the Constitution or by statute. … She will take her job on without agenda.”

Democrats were incensed that Senate Republicans moved forward with the nomination so near an election after refusing in 2016 to allow the chamber to act on a Supreme Court nomination by Trump’s Democratic predecessor, Barack Obama, because it was an election year.

Majority Leader Mitch McConnell’s plan for a confirmation vote on Monday would enable the Senate – controlled by the president’s fellow Republicans – to approve her before the Nov. 3 election as Trump has requested.

In announcing their boycott of Thursday’s vote, Senate Democratic leader Chuck Schumer and Judiciary Committee Democrats said they “will not grant this process any further legitimacy by participating” in the committee’s vote so near the election. Tens of millions of ballots have already been cast in the contest between Trump and Democratic challenger Joe Biden.

No nominee to the Supreme Court has ever been confirmed by the Senate this close to a presidential election.

The 48-year-old Barrett is a devout Catholic who personally opposes abortion. Barrett told the committee last week that she believed the landmark 1973 Roe v. Wade ruling legalizing abortion nationwide was not a “super-precedent” that could never potentially be overturned.

Senate Republicans have made confirmation of Trump’s conservative judicial appointees a high priority. Trump has said he believes the Supreme Court will decide the election’s outcome and has made clear that he wants Barrett on the bench for any election-related cases.

Republicans are hoping that Barrett’s confirmation can give an election boost to incumbent senators in the party facing tough re-election fights, including Graham in South Carolina and panel members Joni Ernst in Iowa and Thom Tillis in North Carolina.

In an interview with the CBS program “60 Minutes,” Biden said if elected he would create a bipartisan commission of constitutional scholars to look into judicial reforms, saying there could be various “alternatives” to consider besides expanding the Supreme Court. Biden said the judiciary is “getting out of whack.”

Trump appointed Barrett to the Chicago-based 7th U.S. Circuit Court of Appeals in 2017.

(Reporting by Lawrence Hurley and Richard Cowan; Editing by Will Dunham and Peter Cooney)