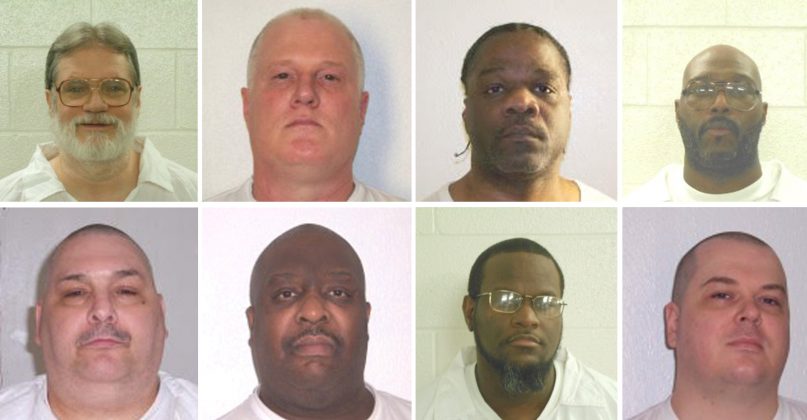 LITTLE ROCK, Ark. (Reuters) – A surgeon told a federal court in Arkansas on Wednesday that a sedative the state plans to use in its lethal injection mix is not suitable for surgery and should be prohibited when Arkansas holds an unprecedented series of executions later this month.

Arkansas plans to kill eight prisoners in dual executions over 11 days from April 17, although a federal judge has halted one execution. Death penalty opponents have said the rushed schedule is reckless and increases the chance of errors.

The European Union on Wednesday called on Arkansas to commute the death sentences.

The convicted murderers scheduled to die have asked U.S. District Judge Kristine Baker in Little Rock to halt their executions, saying the state’s rush to the death chamber was unconstitutional. Baker set a Thursday deadline for evidence.

Lawyers for Arkansas, which has not had an execution in 12 years, have told the court that the drug in question, midazolam, has been used in executions in other states and its lethal injection protocols pass constitutional muster.

Jonathan Groner, a professor at Ohio State University’s medical school and a specialist in pediatrics and trauma, testified that he has never used midazolam as the primary anesthetic in thousands of operations he has performed.

“It would be malpractice for me to do an appendectomy using midazolam as an anesthetic,” he said. He was a witness for the inmates and on cross examination said he was a death penalty opponent.

When the number of executions was rising in the late 1990s, several states held double and even triple executions on the same day, including Arkansas.

At that time, a powerful sedative was part of the mix but since then, major pharmaceutical companies have banned sales to states for executions. This caused a scramble for new mixes, including combinations with midazolam, which has been used in flawed executions in states including Oklahoma and Arizona where witnesses said inmates writhed in pain on death chamber gurneys.

Arkansas Governor Asa Hutchinson, a Republican, set the schedule, saying the state’s midazolam supply expires at the end of April and it was in the interest of justice to hold as many executions as possible while Arkansas has the difficult-to-obtain drug.

Separately, Ohio has asked the entire U.S. Court of Appeals for the Sixth Circuit to re-consider a decision last week from a three-judge panel from that court blocking the state’s lethal injection process, the attorney general’s office said.