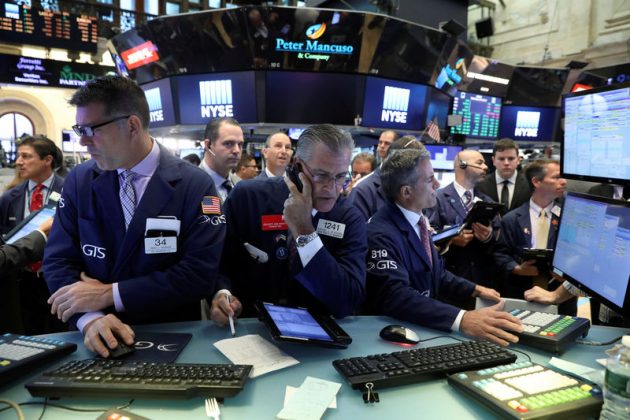 (Reuters) – U.S. stocks were higher in late morning trading on Tuesday, with the Dow coming within spitting distance of the 22,000 mark, helped by strong corporate earnings.

The Dow pierced through the historic 20,000 milestone in January and the 21,000 mark barely one and a half months later.

All eyes will now be on the quarterly performance of Dow-component Apple <AAPL.O>, which reports after the closing bell. The iPhone maker’s shares were up 0.25 percent.

Tech has been the best performing sector this year, despite recent bouts of volatility on rising valuation concerns. The tech index’s <.SPLRCT> 0.49 percent rise on Tuesday led the major S&P sectors.

Amazon <AMZN.O> provided the biggest boost to the S&P 500 and the Nasdaq with its 1.5 percent rise.

“While valuations overall and for the tech sector isn’t cheap, some of the most powerful earnings growth has come from large-cap technology names,” said Bill Northey, chief investment officer at U.S. Bank Wealth Management.

Investors have been counting on earnings to support high valuations for equities. The S&P 500 is trading at about 18 times earnings estimates for the next 12 months, above its long-term average of 15 times.

S&P 500 earnings are expected on average to have grown 10.8 percent in the second quarter, according to Thomson Reuters I/B/E/S.

“We are two-thirds through the earnings season and estimates are going only higher, including for the full year, which is helping support the fundamentals-driven market.” said Northey.

A 0.22 percent fall in healthcare <.SPXHC> led the laggards. Pfizer <PFE.N> was down 1.10 percent after the drugmaker’s quarterly revenue missed expectations.

Regeneron <REGN.O> fell 3.58 percent following a rating downgrade by a brokerage. The stock was the top drag on the Nasdaq.

The core PCE numbers – the Federal Reserve’s preferred metric to gauge inflation – for June edged up 0.1 percent following a similar increase in May.

In the 12 months through June, the so-called core PCE price index increased 1.5 percent after advancing by the same margin in May, remaining below the Fed’s 2 percent target rate.

Sprint <S.N> jumped 9.78 percent after swinging to a quarterly profit for the first time in three years.

(Reporting by Tanya Agrawal in Bengaluru; Editing by Anil D’Silva)