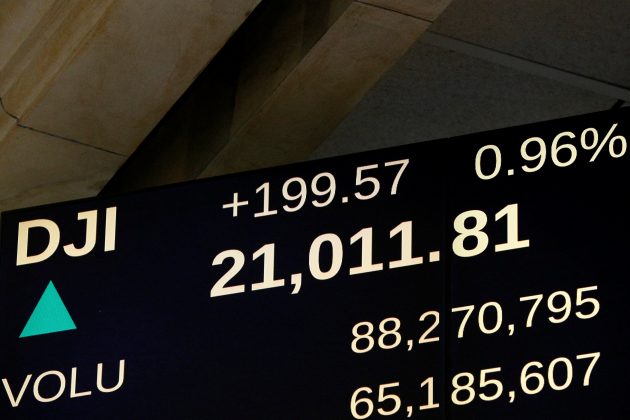 A screen shows the Dow Jones Industrial Average soon after the market opened on the floor of the New York Stock Exchange . REUTERS/Brendan McDermid

(Reuters) – The Dow crossed the 21,000 mark for the first time ever on Wednesday, as President Donald Trump’s measured tone in his first speech to Congress lifted investor optimism and bank stocks surged on hopes of an interest rate hike this month.

Trump on Tuesday said he wanted to boost the U.S. economy with a “massive” tax relief and make a $1 trillion effort on infrastructure, bets that have helped Wall Street scale new records since the November election.

“Trump came off very Presidential and investors are drawing optimism from the way he delivered the message in his speech,” said Andre Bakhos, managing director at Janlyn Capital in Bernardsville, New Jersey.

“Today is just another vote of confidence in Donald Trump being able to do what he says he wants to do.”

If the Dow closes above 21,000, it would have taken 24 trading sessions since the blue-chip index first closed above 20,000, matching the fastest move between thousand-point milestones, which happened between March and May 1999 and took the index above 11,000.

Banks and industrial stocks, which have benefited the most in the post-election rally, were the biggest gainers on Wednesday. The spike also helped the S&P to break out from the tight trading range the index has been stuck in since Dec. 7.

The three main indexes were on track for their best one-day gain since Nov. 7, a day before the U.S. presidential election.

The KBW Nasdaq Bank index <.BKX> was up 3.3 percent, while the dollar gained 0.6 percent.

The odds of March rate hike also rose after the Commerce Department reported that January inflation ticked up by the most in four years.

Traders have now priced in a nearly 70 percent chance of rate hike when the Fed’s policy-setting body meets on March 14-15, according to Thomson Reuters data.

“The specter of higher rates means the economy is doing better,” Bakhos said.

Seven of the 11 major S&P sectors, including industrials <.SPLRCI> and materials <.SPLRCM>, gained between 1.4 and 2.7 percent.

Lowe’s <LOW.N> stock jumped 9.3 percent to $81.22 and was the biggest percentage gainer on the S&P, after the home improvement chain issued an upbeat sales forecast.

One laggard on all the three indexes was Intel <INTC.O>, which fell 1.2 percent after Bernstein downgraded the stock to “underperform” and cut its price target.

(Reporting by Yashaswini Swamynathan in Bengaluru; Editing by Sriraj Kalluvila)