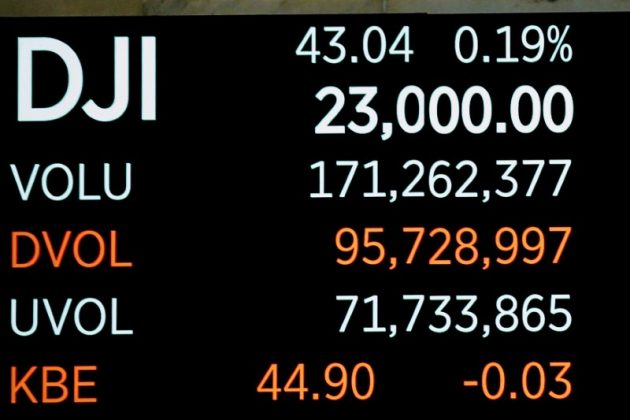 A screen shows the Dow Jones Industrial Average as it briefly traded at 23,000 on the floor of the New York Stock Exchange (NYSE) in New York, U.S., October 17, 2017. REUTERS/Brendan McDermid

(Reuters) – The Dow Jones Industrial Average breached the 23,000-mark for the first time on Tuesday, powered by strong earnings from UnitedHealth and Johnson & Johnson.

The broader market, however, was weighed down by losses in industrial, financial and technology stocks.

Shares of the largest U.S. health insurer <UNH.N> touched a life high, rising as much as 5.83 percent, after the company reported a stronger-than-expected profit and raised its full-year earnings forecast.

That, along with a 2.6 percent rise in Johnson & Johnson <JNJ.N>, led a 1 percent gain in the S&P healthcare sector <.SPXHC>.

“We’re not seeing a market that’s galloping along here. The market from a technical perspective is tired. What you’re seeing is some hesitancy but not any major declines.”

Treasury yields and dollar gained after a report that U.S. President Donald Trump was impressed by his meeting with economist John Taylor, who is considered to favor higher interest rates than current Federal Reserve Chair Janet Yellen.

The equity market, however, was not impacted by a report that Trump is likely to announce his choice before going to Asia in early November.

Nine of the 11 major S&P indexes were lower, led by a 0.42 percent drop in industrials <.SPLRCI> index.

General Electric’s <GE.N> 1.15 percent fall led losses in the industrial sector, while drop in shares of Microsoft <MSFT.O> and Intel <INTC.O> weighed on the tech sector.

Netflix <NFLX.O> slipped 1.15 percent after touching a record high as more subscribers signed up for its popular original content in the latest quarter.