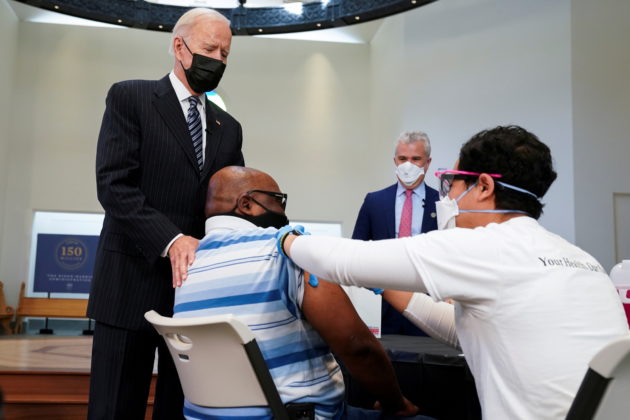 By Stephanie Nebehay and Ludwig Burger

GENEVA/FRANKFURT (Reuters) -Drugmakers on Thursday said U.S. President Joe Biden’s support for waiving patents of COVID-19 vaccines could disrupt a fragile supply chain and that rich countries should instead share more generously with the developing world.

If adopted by the World Trade Organization, the proposal would invite new manufacturers that lack essential know-how and oversight from the inventors to crowd out established contractors, the International Federation of Pharmaceutical Manufacturers and Associations (IFPMA) said.

“I have heard many (vaccine makers) talking about ‘our resources are stretched, our technicians are stretched’,” IFPMA Director General Thomas Cueni told Reuters. He warned of a possible free for all if “sort of rogue companies” were allowed to become involved.

Vaccine developers echoed his comments that waiving intellectual property rights was not a solution.

“Patents are not the limiting factor for the production or supply of our vaccine. They would not increase the global production and supply of vaccine doses in the short and middle term,” said Germany’s BioNTech, which aims to supply up 3 billion doses together with Pfizer this year.

BioNTech said it took more than a decade to develop its vaccines manufacturing process and replicating it required experienced personnel and a meticulous technology transfer, among several other factors beyond patents.

Another German company CureVac, which hopes to release trial results on its messenger ribonucleic acid (mRNA) vaccine as early as this month, said patents were not to blame for supply bottlenecks.

“Since mRNA technology has emerged as the key technology in the fight against COVID-19, the world now needs the same raw materials in unfathomable amounts. The biggest problem is how to coordinate this,” a spokeswoman said.

The DPA is a decades-old U.S. law that prioritized procurement orders related to U.S. national defense, but it has been widely used in non-military crises, such as natural disasters.

Cueni said the way to kickstart low-income countries’ vaccination campaigns was for rich countries to donate vaccine, rather than widen eligibility to young and healthy people at home.

Moderna, which on Thursday reported quarterly results, said waiving intellectual property rights would not help to increase supply of its vaccines in 2021 and 2022.

The U.S. drugmaker said last year it would not enforce its vaccine patents. CureVac said on Thursday it would also not enforce its patents during the pandemic and that it knew of no other developer that would.

Italy’s ReiThera which is in late-stage tests on an experimental COVID-19 vaccine, was also critical of patent waivers.

“There is proprietary know-how that has to be transferred by the owner. And then there is the problem with process materials, which at the moment have delivery times of almost a year,” ReiThera’s chief of technology Stefano Colloca said.

In contrast to the industry reaction, the GAVI vaccine alliance, which co-leads the COVAX dose-sharing program with the WHO and faces major supply constraints, welcomed Biden’s support for waiving intellectual property rights.