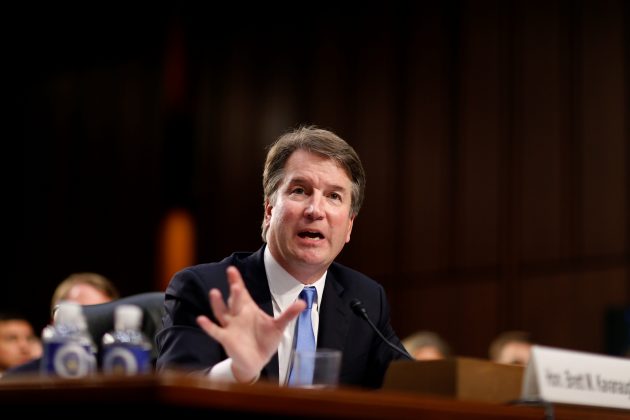 WASHINGTON (Reuters) – Supreme Court nominee Brett Kavanaugh will face a final barrage of questions on Thursday in a multi-day U.S. Senate confirmation hearing, as Democrats press him on his independence from the man who nominated him, President Donald Trump.

A conservative appeals court judge and former Republican White House aide, Kavanaugh has stressed his independence. But in a more than 12-hour session on Wednesday, he sidestepped questions about the scope of presidential power.

The hearing’s focus on that issue came amid a widening probe into Russian meddling in U.S. politics and turmoil within the White House, clouding the presidency of Trump, who is working to get more conservative judges appointed to the federal courts.

If confirmed to a lifetime appointment, Kavanaugh is seen as likely to tilt the nation’s highest court even further to the right. That prospect worries Democrats and heartens Republicans on volatile issues ranging from abortion to guns to business regulation.

Kavanaugh has been an appeals court judge for 12 years and earlier worked for former Republican President George W. Bush.

After more questions from senators on Thursday, his hearing is set to wrap up on Friday with testimony from outside witnesses. Republicans hope Kavanaugh will be confirmed by the Senate before the start of the next Supreme Court term on Oct 1.

Senate Democrats have vowed a fierce fight to block him. But Trump’s fellow Republicans hold a slim Senate majority and there are no clear signs of defections in their ranks. As a result, it is likely that Kavanaugh will be confirmed.

On presidential power, Kavanaugh declined on Wednesday to pledge he would step aside from any cases that might come before the court involving Trump’s conduct.

Trump has often criticized the judiciary. Some liberals have expressed concern Kavanaugh could be a rubber stamp for Trump and protect him from lawsuits and investigations.

Asked if he would have any trouble ruling against Trump or the executive branch, Kavanaugh replied: “No one is above the law in our constitutional system.”

He dodged a question about whether a president must respond to a subpoena, an issue that could come into play as Special Counsel Robert Mueller investigates possible collusion between Trump’s 2016 presidential campaign and Moscow.

“I can’t give you an answer on that hypothetical question,” Kavanaugh said.

He also avoided clearly answering a question about whether a president could pardon himself or someone else in exchange for a promise not to testify against him.

On abortion, Kavanaugh signaled respect for the landmark 1973 Roe v. Wade Supreme Court ruling legalizing the procedure nationwide. He called it an important legal precedent reaffirmed by the justices over the decades.

Liberals are concerned Kavanaugh could provide a decisive fifth vote on the nine-justice court to overturn the 1973 abortion ruling.

Kavanaugh called the Roe decision “an important precedent of the Supreme Court that has been reaffirmed many times.” He highlighted the 1992 Planned Parenthood v. Casey ruling that reaffirmed Roe, calling it a “precedent on precedent.”