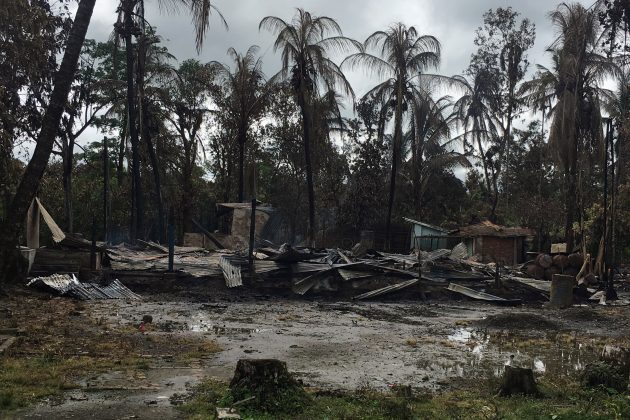 FILE PHOTO: A burnt house is seen in a village in Maungdaw in the north of Rakhine state in Myanmar, September 12, 2017. REUTERS/Stringer/File Photo

MAUNGDAW, Myanmar (Reuters) – Along the main road that stretches nearly 40 kilometers north from Maungdaw town in Myanmar’s violence-riven Rakhine State, all but one of the villages that were once home to tens of thousands of people have been turned into smouldering ash.

Despite strict controls on access to northern Rakhine, Reuters independently traveled to parts of the most-affected area in early September, the first detailed look by reporters inside the region where the United Nations says Myanmar’s security forces have carried out ethnic cleansing.

Nearly 500 people have been killed and 480,000 Rohingya have fled since Aug. 25, when attacks on 30 police posts and a military base by Muslim militants provoked a fierce army crackdown. The government has rejected allegations of arson, rape and arbitrary killings leveled against its security forces.

“We were scared that the army and the police would shoot us if they found us … so we ran away from the village,” said Suyaid Islam, 32, from Yae Khat Chaung Gwa Son, near the area visited by Reuters north of Maungdaw. He was speaking by phone from a refugee camp in Bangladesh after leaving his village soon after the attacks.

Residents of his village told Reuters it had been burned down by security forces in an earlier operation against Rohingya insurgents late last year. Those that did not flee have been surviving since in makeshift shacks, eating food distributed by aid agencies.

The government said more than 6,800 houses have been set on fire. It blames the Rohingya villagers and the Arakan Rohingya Salvation Army (ARSA), which staged the Aug. 25 attacks.

“The information we obtained on this side is that terrorists did the burnings,” said Zaw Htay, spokesman for national leader Aung San Suu Kyi.

Reuters reporters have made two trips to northern Rakhine, visiting the townships of Maungdaw, Buthidaung and Rathedaung, and driving from Maungdaw through the most affected area along the main road north to the town of Kyein Chaung. (For a graphic of the area, click: http://tmsnrt.rs/2y8FgQ8)

The reporters talked briefly to residents but, because many were scared of being seen speaking to outsiders, most interviews were carried out by phone from outside the army operation area.

Little aid has made it to northern Rakhine since the U.N. had to suspend operations because of the fighting and after the government suggested its food was sustaining insurgents. Convoys organized by the Red Cross have twice been stopped and searched by hostile ethnic Rakhines in the state capital Sittwe.

In U Shey Kya, where last October Rohingya residents accused the Myanmar army of raping several women, a teacher who spoke to Reuters from the village by phone said only about 100 families out of 800 households have stayed behind.

Those who remain are playing a cat-and-mouse game with the soldiers, who come to the village in the morning prompting the residents to hide in the forest and return at night.

“We don’t even have food to eat for this evening. What can we do?” said the teacher. “We are close to the forest where we have leaves we can eat and find some water to survive.” He refused to give his name because he had been warned by the authorities not to talk to reporters.

The man said escaping through bush in monsoon rain with his elderly parents, six children and pregnant wife was not an option.

Zaw Htay said the government has prioritized humanitarian assistance to the area.

“If there are any locations where aid has not reached yet, people should let us know, we will try to reach them as soon as we can,” he said.

About 30,000 non-Muslim residents of northern Rakhine have also been displaced.

Before the latest exodus there were around 1.1 million Rohingya Muslims in Myanmar, mostly living in Rakhine, where they are denied citizenship and are regarded as interlopers from Bangladesh by the Buddhist majority.

Rohingya who have fled to Bangladesh and human rights organizations say ethnic Rakhine vigilantes have aided the military in driving out the Muslim population.

Kamal Hussein, 22, from Alel Than Kyaw, south of Maungdaw town said his village was destroyed in early September, after which he fled to Bangladesh, where he spoke to Reuters.

Hussein said Rakhine mobs “poured petrol on the houses. Then, they came out and the military fired a grenade launcher at a house to set it alight”.

Government spokesman Zaw Htay said some empty buildings in the area had been burned by ethnic Rakhines. “We told the regional government to take action on that,” he said.

The damage caused by the fires, Reuters interviews and satellite pictures show, is by far the largest in Maungdaw, where the bulk of insurgent attacks took place. Across the mostly coastal area, stretching more than 100 km (60 miles) through thick bush and monsoon-swollen streams, most villages have been burned.

Maungdaw town itself, until recently ethnically mixed with Rakhine Buddhists, Muslims and some Hindus, is now segregated, with the remaining Rohingya shuttered in their homes. Some 450 houses in Rohingya parts of the town were burned down in the first week after the attacks, HRW said citing satellite photographs.

“Those who stored food, sold it and raised money to flee to Bangladesh,” Mohammad Salem, 35, who used to sell cosmetics at the market, told Reuters by phone from the town.

In ethnically-mixed Rathedaung township, 16 out of 21 Rohingya villages have been burned, according to residents and humanitarian workers.

Of the remaining five, two villages in the south are now cut off from food and threatened by hostile Rakhine neighbors.

In many places people have no access to medicines, residents said.

Reuters talked to two Rakhine Buddhist officials who corroborated the scale of the damage.

Tin Tun Soe, a Rakhine administrator in Chein Khar Li, where a security post had come under attack, said the army response was rapid and all the Rohingya had been driven out. Nearly 1,600 houses were burned down a day after the attacks, he said, though he blamed the fires on the insurgents.

“They have so many people. If they are here, we’re afraid to live,” said Tin Tun Soe. “I am very happy that now all of them are gone.”