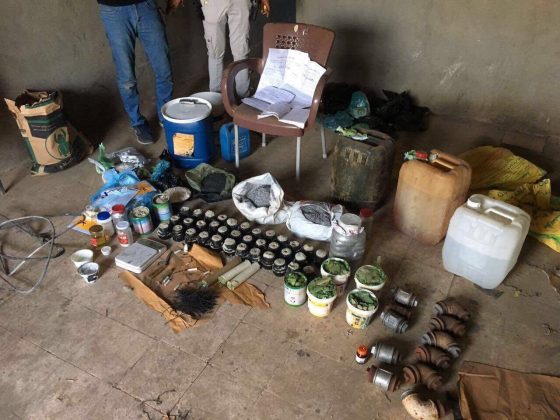 Various equipment and improvised explosive devices and materials used in the manufacture of bombs and explosives, are displayed by police after security forces raided a farmhouse used for shelter and training killing 11 suspected militants in Ismailia, Egypt November 28, 2017 in this handout picture courtesy of the Egyptian Interior Ministry/Handout via REUTERS

CAIRO (Reuters) – Egyptian security forces have killed 11 suspected militants in a shootout near the Sinai, the interior ministry said on Tuesday, just days after more than 300 people were killed in an attack on a mosque in North Sinai.

The shootout occurred during a raid on a suspected militant hideout in the Sinai-bordering province of Ismailia, the ministry said in a statement.

It said the area was being used by militants to train and store weapons and logistical equipment for attacks in North Sinai.

Militants detonated a bomb and then gunned down fleeing worshippers in last Friday’s mosque attack, the deadliest in Egypt’s modern history.

No group has claimed responsibility for the assault, but Egypt’s public prosecutor linked Islamic State militants to the attack, citing interviews with wounded survivors who said militants brandished an Islamic State flag.

Since 2013 Egyptian security forces have battled an Islamic State affiliate in the mainly desert region of North Sinai, where militants have killed hundreds of police and soldiers.

The interior ministry statement on Tuesday did not directly link the suspected militants targeted in the operations to last week’s mosque attack.