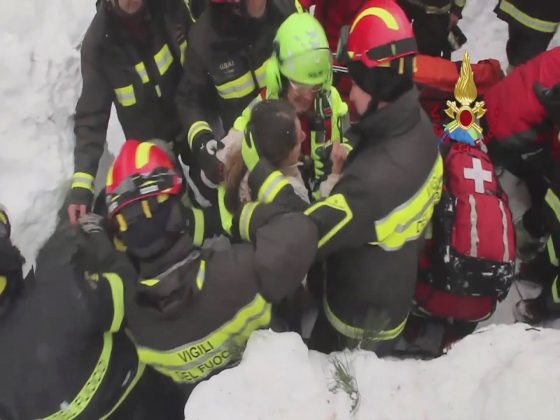 Firefighters rescue a survivor from Hotel Rigopiano in Farindola, central Italy, which was hit by an avalanche, in this handout picture released on January 20, 2017 by Italy's Fire Fighters. Vigili del Fuoco/Handout via REUTERS

By Antonio Denti and Valentina Consiglio

PENNE, Italy (Reuters) – Eight people were found alive on Friday two days after being buried under a massive avalanche that hit a luxury mountain hotel in central Italy, a Civil Protection official said.

Titti Postiglione told reporters that two of the survivors had already been pulled clear of the snow and debris which destroyed the isolated Hotel Rigopiano on Wednesday. Rescuers were digging to free the remaining six people.

“Finding these people gives us further hope there are other survivors,” Postiglione said.

More than 30 people, including four children, were in the building when the avalanche slammed into it, officials said, reducing much of it to rubble and spreading debris across the valley floor.

Two men who were outside the hotel at the time managed to escape the wall of snow. Officials have confirmed that two bodies have been removed from the site, while Italian media said two more corpses had been located.

One of the survivors found on Friday was a young girl, Deputy Interior Minister Filippo Bubbico said, who is helping coordinate rescue efforts at the scene.

The group were found in the hotel kitchen area which was not crushed by the tonnes of snow that obliterated much of the four-storey building, media said

Helicopters have been dispatched with equipment and doctors to help extract and evacuate the survivors.

The disaster struck the hotel in the Gran Sasso park late on Wednesday afternoon amid a driving snowstorm, just hours after four earthquakes with a magnitude above 5 rattled the area.

As much as 5 meters (16 ft) of snow covered much of what is left of the hotel, said Walter Milan, a member of the Alpine Rescue service who was on the scene. Only sections of the spa and swimming area were intact, he said.

An investigation into the tragedy has been opened by a court in Pescara amid accusations that the emergency response was slow. The first rescuers arrived amid a snow storm on skis early on Thursday morning, some 11 hours after the avalanche.

Giampiero Parete, a chef who was a guest in the hotel, had gone to his car to get headache pills for his wife when the avalanche struck. His wife and two children, aged six and eight, are still missing.

Parete called his boss, Quintino Marcella, with his cell phone at 5:40 p.m. on Wednesday, just after the avalanche had struck, asking him to call for help.

“He told me: ‘The hotel has collapsed'” Marcella said in an interview with RAI state TV, adding that the local prefecture did not immediately believe him. He kept calling until he was assured help was on the way some two hours later.

One thought on “Eight survivors found after massive Italy avalanche”