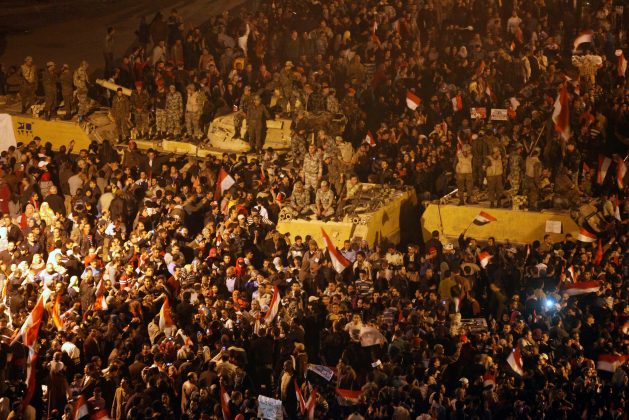 By Mohamed Abdellah and Mahmoud Mourad

CAIRO (Reuters) – Everyday at sunset, Ahmed Maher, one of Egypt’s best known activists, says good night to his family and heads to a Cairo police station to spend the night under police watch.

While what he describes as ‘half an imprisonment’ has disrupted his family life, career, education and freedoms, Maher considers himself luckier than other activists of the 2011 uprising that ended autocratic president Hosni Mubarak’s 30 years in power.

Like many young Egyptians who camped out for days at Cairo’s Tahrir Square in 2011, the 38-year-old Nobel Peace Prize nominee expected Mubarak’s downfall to pave the way for more freedoms to allow the country to flourish.

Instead, Maher and other activists say things have gotten worse.

“No one imagined that the situation would be this bad,” Maher, an engineer who is also studying for a degree in political science, told Reuters. “Even the right to gather in a crowd or to express an opinion is not available.”

President Abdel Fattah al-Sisi, who came to power determined to crush the Muslim Brotherhood after a year in office that saw the economy suffer, has also targeted secular activists, including many prominent figures of the January 25 uprising.

Many have fled the country, others are in prison while a third group have been cowed into silence.

Maher, freed from a three-year-prison sentence in early 2017 for breaking anti-protest laws, immediately began a three-year-probation period under which he must spend the night, from 6 p.m. until 6 a.m., at a police station.

Sisi supporters, who now celebrate the anniversary of the June 30, 2013 uprising that toppled Islamist President Mohamed Mursi, argue tough action was needed to rescue the economy and get rid of Islamists they accused of trying to take steps to retain power.

Egypt’s economy has begun to turn around since Sisi came to office in 2014, but reforms adopted under a 2016 IMF loan that included devaluing the Egyptian pound and a gradual lifting of state fuel subsidies have also deepened poverty in Egypt.

Rights activists say that Sisi has presided over the worst crackdown on freedoms in Egypt’s modern history.

Thousands of activists, most of them Islamists but also includes dozens of liberals and leftists, have been jailed under strict regulations imposed since 2013.

Rights activists say that intellectuals, government critics and human rights campaigners have been rounded up on charges of belonging to “terrorist organizations” or publishing false news or disturbing public order.

Ahmed Douma, another figurehead of the 2011 uprising, was sentenced to 15 years in jail earlier this month after he was convicted of rioting and attacking security forces in 2011.

“Every time a human being is tortured, disappeared, extra-judicially killed, executed or arbitrarily arrested, Egypt’s authorities convey a clear message to their people, the change they demanded will not come,” EuroMed Rights, a Copenhagen-based network seeking to bolster ties between NGOs on both sides of the Mediterranean, said in a statement.

Egypt, which denies holding political prisoners, rejects abuse allegations. But Sisi’s admirers say firmness has been necessary to end years of lawlessness and militants behind attacks that have killed hundreds.

“The whole world had thought that the youths of the revolution would play a role in running the country, like in any country that looks for qualified youths would,” said Maher, who founded the April 6 Movement, a grassroots group founded in 2008 that had campaigned against Mubarak’s rule. “Sadly, there is a big hostility towards the youths,” he added.

Last September, 17 U.N. human rights experts criticized Egypt for its use of anti-terrorism laws to detain activists fighting for women’s rights and against graft, torture and extra-judicial killings.

Israa Abdel Fattah, another member of the April 6 Movement, said that Egypt was worse off now than it was before the January 25 uprising. “Egypt can change and everything will be good if it possessed one thing, and that’s justice,” said Abdel Fattah, who like many other activists is barred from traveling abroad.

Activists say the only positive result of the revolution, a two-term limit on presidential terms, could also soon be lost if Sisi supporters pursue plans to amend the constitution.

At a ceremony to mark Police Day, Sisi paid tribute to the January 25 uprising but stayed silent when a speaker asked him to agree to remain in office for two additional four-year terms.

Anwar al-Hawary, former editor of the privately-owned al-Masri al-Youm newspaper, said Sisi appears to favor staying in power beyond a second term, warning that any such move would be “illogical”.

“The country cannot cope with another uprising or a coup,” he said.