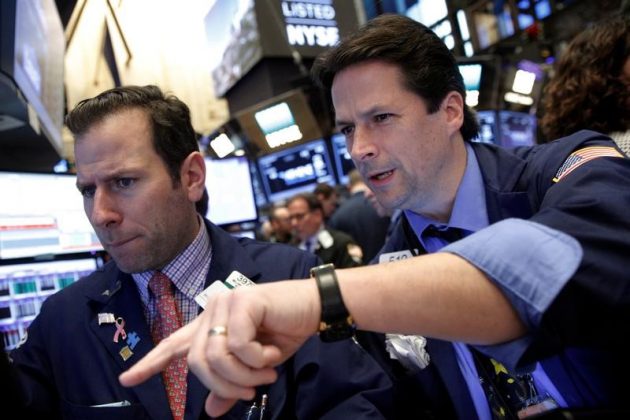 (Reuters) – The S&P 500 and the Dow hit record highs on Monday, fueled by energy shares, while the Nasdaq was lower, dragged down by technology stocks, a day ahead of the Fed’s two-day meeting.

Oil prices gained as much as 6.5 percent to an 18-month high after OPEC and some of its rivals reached their first deal since 2001 to jointly reduce output to try to tackle global oversupply and boost prices.

The S&P energy index was the top performing sector with a 1.7 percent rise. Oil major Exxon was up 2.54 percent, providing the biggest boost to the Dow and S&P. Chevron rose 2.2 percent.

President-elect Donald Trump’s expected agenda of economic stimulus and reduced taxes and regulations has fueled a market rally, with the benchmark S&P 500 rising 5.6 percent since Nov. 8 to Friday’s close.

The Dow has closed at record highs 14 times since the election.

“The market has been rising on the incoming administration’s proposals, but how many of those actually pass through Congress remains to be seen,” said Paul Nolte, portfolio manager at Kingsview Asset Management in Chicago.

“Investors are expecting the Fed to hike rates but are more interested in the tone of the statement.”

Market participants are keeping a close watch on the U.S. Federal Reserve’s last meeting for the year, beginning Tuesday, with a statement from Fed Chair Janet Yellen on Wednesday.

Six of the 11 major S&P sectors were higher.

The consumer discretionary led the decliners with a 0.82 percent fall, weighed down by a 1.24 percent drop in Amazon’s shares.

The industrials sector was down 0.58 percent, dragged down by defense stocks.

Lockheed Martin declined 3.9 percent at $249.22 after Donald Trump tweeted that the company’s F-35 program and costs were “out of control”. Other defense stocks, such as General Dynamics, Raytheon, and Northrop Grumman, were down between 2.7-4.5 percent.

Viacom fell 8.5 percent to a two-month low of $35.35 after Sumner Redstone’s privately-held National Amusements withdrew its merger proposal for CBS and Viacom, according to a source familiar with the situation. CBS was down 2.7 percent.

Ophthotech slumped 84.9 percent to a life-low of $5.85 after Novartis said a combination of its eye drug along with the company’s did not produce better outcomes.