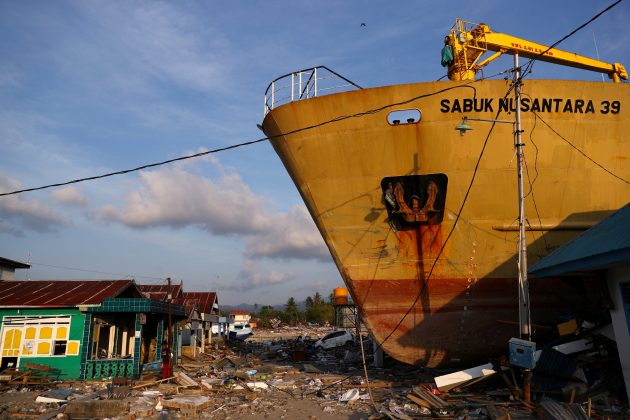 By Kanupriya Kapoor and Tom Allard

WANI, Indonesia (Reuters) – Ship’s engineer Charles Marlan had the unsettling sensation his vessel was being sucked out to sea, the telltale sign of an imminent tsunami, just minutes after a major earthquake struck the Indonesian island of Sulawesi on Friday.

His passenger and cargo vessel, the 500-tonne KM Sabuk Nusantara 39, was docked in Wani, east of the city of Palu, which suffered the brunt of the disaster.

“The whole ship was shaking, everything in our bunks started falling,” Marlan said.

The ship was picked up by the tsunami rushing in from the sea and slammed onto land, crashing into a dockside settlement.

And that’s where it lies, high and dry, nearly a week after the earthquake and tsunami devastated the area, killing at least 1,424 people.

Marlan and his fellow crewmen knew they were in trouble when they felt the ship being pulled back out to sea from the dock, as the sea receded, heralding the arrival of a tsunami.

They had no sooner scrambled into life jackets when a five-meter wave bore down on them.

“I could hear the waves coming,” Marlan said, describing how he was gripped by fear.

“The waves carried us very fast and before we knew it, we were sitting on land,” he said in an interview aboard the ship, which sits balanced precariously, its propeller and rudder exposed, hanging dusty meters above the ground. 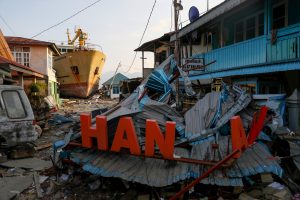 No one on the boat was hurt.

Now Marlan and 20 crewmen are stranded, awaiting a decision on what should be done from the national ferry operator, which owns the vessel.

They survive on handouts from passing ferries and while away the time, attending a roll-call every now and then and chatting with neighborhood kids who climb up on board.

Marlan said he was thankful his ship had not killed anyone when it was hurled onto the land, as far as they knew.

“What is important is we are alive and for that we should be grateful.”