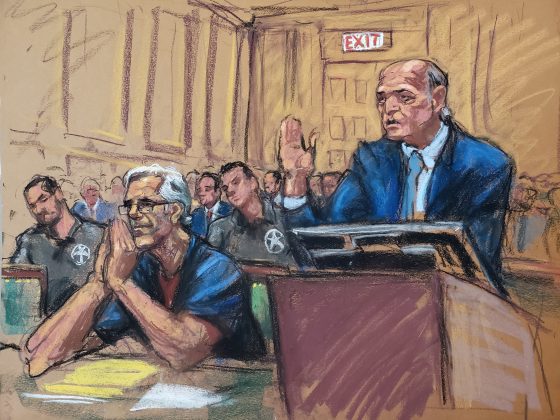 NEW YORK (Reuters) – Two women who say they are victims of sexual misconduct by American financier Jeffrey Epstein on Monday urged a U.S. judge to keep him in jail while he awaits trial on charges of sex trafficking dozens of underage girls.

Wild and another accuser, Annie Farmer, spoke at the end of a hearing in which prosecutors argued that Epstein, 66, posed an “extraordinary risk of flight” and danger to the community and must remain in jail.

Epstein, who has pleaded not guilty, has asked to be allowed to live under house arrest with armed guard at his expense in his mansion on Manhattan’s Upper East Side, which is valued at $77 million.

The hedge fund manager had a social circle that over the years has included Donald Trump before he became U.S. president, former President Bill Clinton and Britain’s Prince Andrew.

Berman said he would probably announce his bail decision on Thursday at 9:30 a.m. EDT (1330 GMT), saying he needed more time to absorb the case.

Lawyers for Epstein said their client, who wore dark blue jail scrubs in court, has had an unblemished record since he pleaded guilty more than a decade ago to a state prostitution charge in Florida and agreed to register as a sex offender.

Epstein is being held at the Metropolitan Correctional Center, a fortress-like jail that has been criticized by inmates and lawyers for harsh conditions.

He pleaded not guilty to sex trafficking and conspiracy charges on July 8, two days after his arrest at New Jersey’s Teterboro Airport, where he had flown back on his private plane from Paris. Epstein faces up to 45 years in prison if convicted.

Epstein is accused of arranging for girls under the age of 18 to perform nude “massages” and other sex acts, and of paying some girls to recruit others, from at least 2002 to 2005.

A prosecutor, Assistant U.S. Attorney Alex Rossmiller, on Monday told the judge that a search of Epstein’s home uncovered nude images of underage girls, including at least one who claimed to be among the financier’s victims.

The prosecutor also said one item seized was a passport that appeared to have been issued by a foreign country in the 1980s that containing Epstein’s photo, but someone else’s name.

Last week, prosecutors said in a court filing that Epstein made payments to potential witnesses last year in an apparent effort to influence them.

One of his lawyers, Martin Weinberg, told Berman on Monday that Epstein needed to be out of jail so he and his lawyers could prepare their defense.

In 2016, Berman rejected a similar bail proposal from Turkish-Iranian gold trader Reza Zarrab to let him live in an apartment under the watch of privately funded guards, saying wealthy defendants should not be allowed to “buy their way out of prison by constructing their own private jail.”

The judge expressed similar skepticism on Monday, noting that all defendants have the same right to prepare their defense as Epstein.

Under the Florida agreement, Epstein served 13 months in a county jail, but was allowed to go to his office during the day.

A federal judge ruled in February that the agreement violated a federal law on crime victims’ rights.

Alex Acosta, who as U.S. Attorney for the Southern District of Florida oversaw Epstein’s earlier deal, resigned on Friday as Trump’s Secretary of Labor, saying he did not want to be a distraction for the White House.