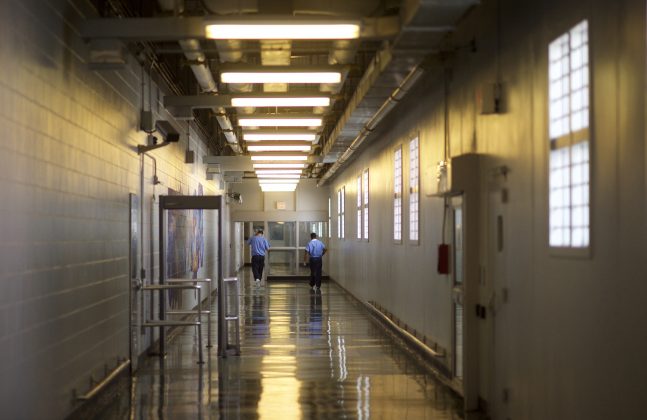 Inmates walk the hallways during a media tour of the Curran-Fromhold Correctional Facility in Philadelphia, Pennsylvania, August 7, 2015. REUTERS/Mark Makela/File Photo

WASHINGTON (Reuters) – U.S. prisoners who were expecting earlier release for good behavior, thanks to a new criminal justice law enacted last month, must keep waiting due to an error in the bill, said activists working with the White House to fix the mistake.

Potentially thousands of inmates could be affected by the error in the First Step Act, signed into law on Dec. 21 by Republican President Donald Trump in a rare example of bipartisanship in Washington, with both Democrats and Republicans backing it.

The law required the Justice Department’s Bureau of Prisons (BOP), among other measures, to retroactively recalculate good behavior credits, a step that had been expected to reduce some inmates’ sentences by as many as 54 days per year.

Previously, inmates could only earn up to 47 days per year toward early release for good behavior.

Advocates of the law expected the bill’s enactment into law meant that several thousand inmates would get their freedom right away, in time for the 2018 holiday season.

But a drafting error in the language of the law has prevented the Justice Department from immediately applying the new method of calculating good-behavior credits, they said.

“You have thousands of families who thought the day this bill passed, their loved ones’ sentence was going to be recalculated and they were going to walk out of their halfway house, their home confinement … or leave prison,” said Kevin Ring, president of Families Against Mandatory Minimums (FAMM).

Wyn Hornbuckle, a Justice Department spokesman, said the department is analyzing changes for the law and plans to “carry out all necessary steps.”

Reuters has seen a letter sent to inmates at the Federal Correctional Institution Coleman, a federal prison in Florida, in which officials acknowledged the new good-behavior credits would not take effect yet.

“The law will allow BOP in the future to apply 54 days of credit for every year a sentence was imposed, which is a change to the prior law,” the letter says.

“While this change may result in additional credit for inmates in the future, it is not effective immediately nor is it applicable to all inmates,” it says.

The law also mistakenly said that new rules on good-behavior credits could not kick in until BOP finishes a risk-assessment process for deciding which inmates can get earned-time credits.

Whether the error can be promptly fixed was unclear. A federal judge in Chicago on Jan. 3 denied a prisoner’s request to be released earlier for good behavior, citing the letter of the law.

“This court is not unsympathetic to the apparent inequity of petitioner’s situation,” wrote U.S. District Judge Sharon Johnson Coleman. “This court, however, is obligated to apply the law as it is written.”

Several activists for prisoners told Reuters their groups are working with the White House on whether the Justice Department can find a work-around or if a legislative fix needs to be tucked into a broader spending bill for action by Congress. Ring said his group is also in talks with lawmakers.

The error comes at a difficult time, with the federal government in a partial shutdown. The Justice Department is one of several agencies partially closed because its funding ran out on Dec. 22 and has not been renewed by Congress.

Trump is demanding that any legislation to restore agencies’ funding must include $5.7 billion for a U.S.-Mexico border wall.

With Democrats opposing that demand, little is being accomplished in Congress and 800,000 federal workers are either working without pay or staying home on furlough.