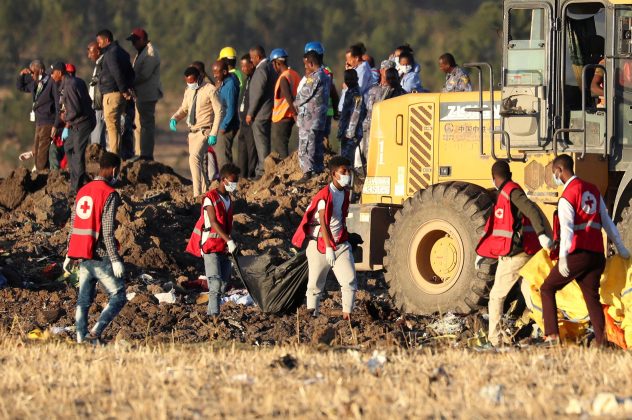 Members of the search and rescue mission carry dead bodies at the scene of the Ethiopian Airlines Flight ET 302 plane crash, near the town of Bishoftu, southeast of Addis Ababa, Ethiopia March 10, 2019. REUTERS/Tiksa Negeri

NAIROBI/ADDIS ABABA (Reuters) – An Ethiopian Airlines passenger jet bound for Nairobi crashed minutes after take-off on Sunday, killing all 157 people on board and raising questions about the safety of the Boeing 737 MAX 8, a new model that also crashed in Indonesia in October. 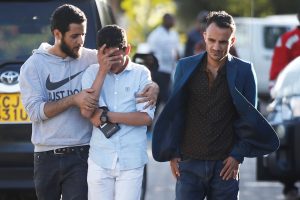 “There are no survivors,” the airline tweeted alongside a picture of Chief Executive Tewolde GebreMariam holding up a piece of debris inside a large crater at the crash site.

“The pilot mentioned that he had difficulties and that he wanted to return,” Tewolde told a news conference.

Passengers from 33 countries were aboard, said Tewolde.

At least four worked for the United Nations, the airline said, and the U.N.’s World Food Program director confirmed his organization had lost staff in the accident.

Weeping relatives begged for information at airports in Nairobi and Addis Ababa.

“We’re just waiting for my mum. We’re just hoping she took a different flight or was delayed. She’s not picking up her phone,” said Wendy Otieno, clutching her phone and weeping.

The aircraft, a 737 MAX 8, is the same model that crashed into the Java Sea shortly after take-off from Jakarta on Oct 29, killing all 189 people on board the Lion Air flight.

The cause of that crash is still under investigation. 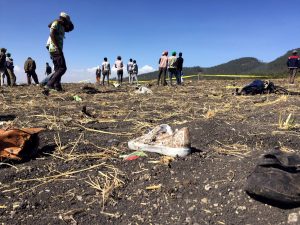 People walk at the scene of the Ethiopian Airlines Flight ET 302 plane crash, near the town of Bishoftu, southeast of Addis Ababa, Ethiopia March 10, 2019. REUTERS/Tiksa Negeri

A senior U.S. government official said it was too early to tell if there was any direct connection between the two accidents, but that reviewing the issue would be among the top priorities for investigators.

The 737 is the world&rsquo;s best selling modern passenger aircraft and is seen as one of the industry&rsquo;s most reliable.

A preliminary report into the October crash focused on airline maintenance and training and technical questions about the response of a Boeing anti-stall system to a recently replaced sensor.

Boeing is working on a software patch on the system, while insisting cockpit procedures were already in place to deal safely with problems the Lion Air crew experienced.

Ethiopian’s new aircraft had no recorded technical problems and the pilot had an “excellent” flying record, Tewolde said.

&ldquo;We received the airplane on November 15, 2018. It has flown more than 1,200 hours. It had flown from Johannesburg earlier this morning,” he said.

Flight ET 302, registration number ET-AVJ, crashed near the town of Bishoftu, 62 km (38 miles) southeast of the capital Addis Ababa, with 149 passengers and eight crew aboard, the airline said.

The flight had unstable vertical speed after take off, the flight tracking website Flightradar24 tweeted.

Data released by the Sweden-based service suggested the aircraft had climbed almost 1,000 feet after taking off from Addis Ababa, a hot and high-altitude airport whose thinner air requires extra effort from an aircraft’s engines.

It dipped about 450 feet before rapidly climbing another 900 feet until the point where satellite tracking data was lost.

The aircraft had shattered into many pieces and was severely burnt, a Reuters reporter at the scene of the crash said. Clothing and personal effects were scattered widely over the field where the plane came down.

There was no immediate indication of what caused the crash and safety experts said it was too early to speculate, adding most accidents are caused by a cocktail of factors.

They said investigators would examine the wreckage and bodies for any signs of burns or unusual forces and study the shape and size of the wreckage field. An urgent priority will be to find the two crash-protected cockpit recorders – one for data and the other for pilots’ voice recordings.

Boeing said it was sending a technical team to help with the Ethiopian-led investigation.

At Nairobi airport, many relatives were left waiting at the gate for hours, with no information from airport authorities. Some learned of the crash from journalists.

Robert Mutanda, 46, was waiting for his brother-in-law, a Canadian citizen.

“No, we haven’t seen anyone from the airline or the airport,” he told Reuters at 1pm, more than three hours after the flight was lost. “Nobody has told us anything, we are just standing here hoping for the best.”

Kenyan officials did not arrive at the airport until 1:30 p.m.

James Macharia, the cabinet secretary for transport, said he heard about the crash via Twitter.

Under international rules, responsibility for leading the crash investigation lies with Ethiopia but the U.S. National Transportation Safety Board (NTSB) will also participate because the plane was designed and built in the United States.

Representatives of Boeing and Cincinnati-based engine-maker CFM International, a joint venture between General Electric and General Electric Co and France&rsquo;s Safran SA, were expected to advise the NTSB.

Ethiopian is one of the biggest carriers on the continent by fleet size. The plane was among six of 30 Boeing 737 MAX 8 jets the rapidly expanding carrier has ordered.

The fleet will continue flying since the cause of the crash is not clear, the CEO said.

Its last major crash was in January 2010, when a flight from Beirut went down shortly after take-off, killing all 90 people onboard. The Lebanese blamed pilot error, which was disputed by the airline.

North American airlines that operate the 737 MAX 8 said they were monitoring the investigation. Southwest Airlines flies 31 MAX 8 jets while American Airlines and Air Canada each have 24 in their fleet. Southwest said it remained confident in the safety of its more than 750 Boeing jets.