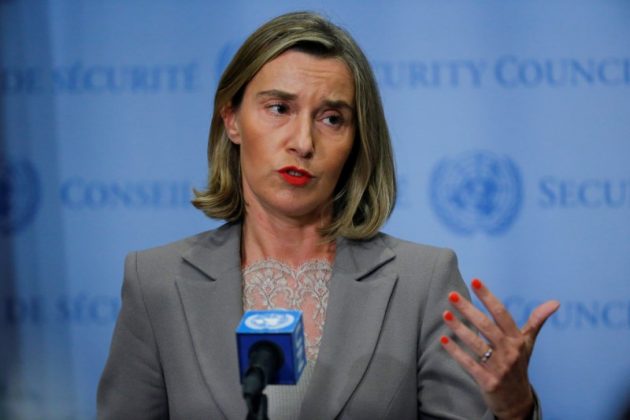 SAMARKAND, Uzbekistan (Reuters) – Senior officials from the European Union and Iran spoke up on Friday in defense of the agreement limiting Tehran’s nuclear program, as the pact comes under heavy pressure from U.S. President Donald Trump.

“The European Union will make sure it will continue to be fully implemented by all, in all its parts,” she said.

Trump on Oct. 13 dealt a blow to the pact by refusing to certify that Tehran was complying with the accord, under which Iran agreed to curb its nuclear program in return for relief from economic sanctions. International inspectors said it was complying.

The U.S. Congress has until mid-December to decide whether to reimpose sanctions lifted by the deal.

“By clinching the nuclear deal and fulfilling all our commitments under the Joint Comprehensive Plan of Action, we have in action proved our compliance with the principle of non-proliferation and nuclear disarmament,” he said, without mentioning Trump directly.

Mogherini said the EU’s ties with ex-Soviet Central Asia were at an all-time high following moves by Uzbekistan’s new government to open up the previously isolated nation.

Mirziyoyev was elected president last December after the death of his authoritarian predecessor Islam Karimov, who was accused of systematic human rights abuses and whose relations with the West were poor.

Seeking to modernize Uzbekistan’s economy, Mirziyoyev has moved to mend those relations and announced an ambitious reform program at home.

After a “very long and fruitful meeting” with Mirziyoyev, Mogherini said the reforms had the full support of Brussels.

Mirziyoyev has also improved ties with neighboring Kazakhstan, Kyrgyzstan, Tajikistan and Turkmenistan after years of bitter standoffs over matters such as borders and water use, winning further praise from Mogherini.

“I would say that we are at the top of our historical experience of cooperation, but we want to use it not as a target point, but as a starting point,” she said.