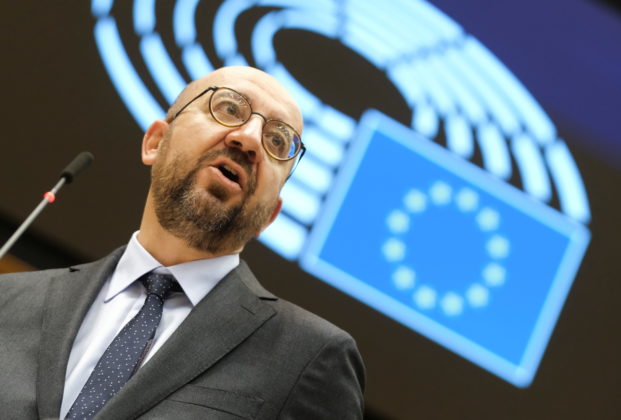 By Gabriela Baczynska and Marine Strauss

BRUSSELS (Reuters) – The European Union told Britain on Wednesday to make up its mind on Brexit, putting the onus back on London to unlock trade talks as the bloc’s chief negotiator said an agreement was still within reach with 10 weeks to go.

A frustrated European Union and piqued Britain exhorted each other this week to compromise to avoid a disruptive finale to the five-year Brexit drama that would add to economic pain from the coronavirus crisis.

“Time is very short and we stand ready to negotiate 24/7, on all subjects, on legal texts. The UK has a bit of a decision to make and it’s their free and sovereign choice,” European Council President Charles Michel told the European Parliament.

He said Britain’s answer would determine its level of access to the EU’s internal market of 450 million consumers. The EU’s Brexit negotiator Michel Barnier told the parliament an agreement was still “within reach”.

“Time is of the essence … Along with our British counterparts, we must find solutions to the most difficult areas,” Barnier said, in comments that pushed sterling higher.

London has this week refused to continue full negotiations, saying the EU must “fundamentally change” its stance.

The bloc sees this as bluff by Prime Minister Boris Johnson but has also extended an olive branch by talking up UK sovereignity, as well as the EU’s readiness to discuss intensively, across the board and on specific legal texts.

A UK spokesman said London noted “with interest” Barnier’s comments that touch “in a significant way on the issues behind the current difficulties in our talks”.

Barnier and his UK counterpart David Frost were due to talk on the phone at 1400GMT on Wednesday.

Britain, one of Europe’s biggest military powers, has also formally notified the EU of its intention to withdraw from the bloc’s military missions by the end of this year, EU diplomats said on Wednesday, as had been announced by London earlier.

The EU has complained about Britain’s refusal to negotiate a new international security and foreign policy pact. In the meantime, Spain and Italy are stepping up their role in the EU’s 17 missions around the world.

Michel stressed the 27 EU members were ready for an abrupt split without a new agreement to avoid tariffs or quotas with three main sticking points in the negotiations: fishing rights, economic fair play and settling disputes.

“We don’t need words, we need guarantees,” he said of fair competition safeguards. “Do our British friends want to regulate state aid and uphold high medical standards? If so, why not commit to them.”

Michel called for a “binding, independent arbitration” to redress market distortions swiftly, adding that London’s draft Internal Market Bill – which would undermine Britain’s earlier divorce deal with the EU – only strengthened the bloc’s resolve to ensure tight policing of any new deal.

The bloc’s executive Commission said London must respect its Brexit settlement regardless of the trade talks.

Michel said losing access to British waters would damage the EU’s fishing industry, and the bloc therefore wanted to prolong the status-quo just as London sought to keep the EU market open for UK companies.

“But the UK wants access to the single market while at the same time being able to diverge from our standards and regulations when it suits them,” Michel said.

Keen to avoid any blame, the bloc is ready to negotiate until mid-November but must then ratify any deal in the European Parliament before time is up.

“Our doors remain open and will remain open until the last day possible,” Barnier said. “But it takes two to reach a deal.”