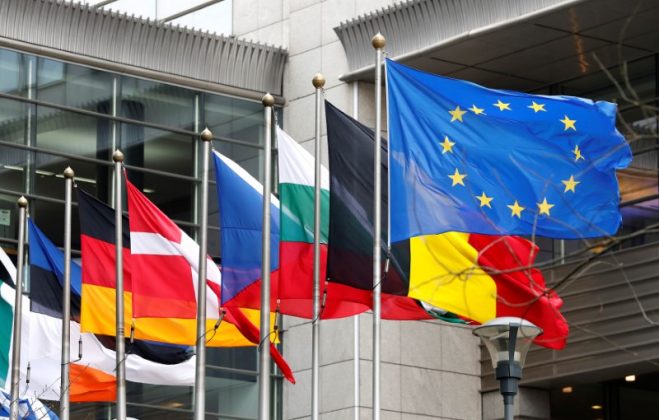 BRUSSELS (Reuters) – As Britain hands the European Union its formal notice to quit this month, Brussels is resigned to losing part of the EU’s western flank but is increasingly stressed that upset in the east is pulling the survivors further apart.

Poland, the biggest of the ex-communist eastern states to join after the Cold War, has picked a fight over the fairly minor matter of who chairs EU summits. Symptomatic of a mounting east-west friction, the spat will overshadow a meeting this week that was meant to forge post-Brexit unity.

Brexit has not created that friction but made it worse, as leaders struggle to quell popular disaffection with the EU that is by no means confined to Britain. Westerners are talking up faster integration, even if that means leaving nationalistic easterners behind in a “multispeed Europe”.

When Chancellor Angela Merkel, raised in East Germany and a key defender of eastern allies, joined her French, Italian and Spanish peers at Versailles on Monday to ram home a message that unless some states press ahead the EU will stall and break, Polish ruling party leader Jaroslaw Kaczynski hit right back.

“The decisions made in … Versailles … aim to reinforce the process of European Union disintegration which has started with Brexit,” he said on Tuesday.

Kaczynski will not be in Brussels for Thursday’s summit but his prime minister, Beata Szydlo, will give voice to his refusal to endorse the reappointment of her centrist predecessor Donald Tusk as European Council president. Tusk and the right-wing Kaczynski are old and bitter rivals in Polish politics.

Brexit deprives the easterners, unwilling to see diktat from Brussels or Berlin replace rule from Moscow, of their strongest ally against EU centralization and euro zone domination.

It also leaves a big hole in the EU budget for paying the subsidies that fund a large slice of public spending in the east — cash that has kept voters there sold on EU membership and which Brussels fears London may now use to court eastern favor and divide the EU to extract better Brexit terms.

On Friday, leaders will work on plans for a March 25 summit in Rome where they hope to use 60th anniversary celebrations of the bloc’s founding treaty to pledge a new unity after Brexit.

Yet the road to Rome has been marked with division over the push by founding powers and the EU executive led by Jean-Claude Juncker for more differentiated EU integration.

“The key message of Rome must be the unity of the 27,” said a senior EU official involved in looking for compromises to ease the friction. “The political context of Brexit should not be a multispeed Europe. That would be completely out of tune.”

Neither side is pushing for a split and all insist they must pull together against challenges from Russia and uncertainty about U.S. support under President Donald Trump. For that reason, officials say, the words to come out of the Brussels and Rome summits will stress unity and soft-pedal the differences.

But east-west friction has heated up in the past two years.

There are rows over eastern reluctance to take in Syrian refugees and Kaczynski’s new policies that Brussels calls undemocratic. New border controls to curb migrants inside the passport-free Schengen zone have fueled eastern fears of losing travel freedoms cherished since the fall of the Berlin Wall.

And there is a brewing crisis over what eastern leaders see as hypocritical protectionism inside the EU single market by western governments trying to impose their own national minimum wages on enterprising — and cheap — eastern “posted workers”, who offer services like trucking and construction in the west.

Last week Poland and its allies demanded Brussels crack down on the “double standards” of firms that offer lower quality versions of western food brands in eastern markets.

It is not just outspoken Poland and Hungary who fret at fragmentation. The worry runs from the Baltic to the Black Sea. Eastern diplomats fear a new gap could open up along the old Iron Curtain that may never close, especially if the rich states play up to voters and refuse to fill the EU’s Brexit budget gap.

Prime Minister Robert Fico told Slovakia’s parliament on Wednesday he was skeptical of the Union’s future once Britain leaves in 2019.

“I’m afraid the EU will be divided by the money issue after 2020…In the spirit of Trump’s ‘America first’, we can expect to hear ‘Germany first’, ‘France first’ etc.”

Noting that current EU arrangements already allow for states to deepen their cooperation — the euro is just one of many examples — a senior diplomat from an eastern member state said he was suspicious of assurances from Merkel and others that any new moves would always be open to any member state to join.

“The only new thing they can mean is that this has changed,” he said. “They are saying ‘No, you are not welcome any more’.

“This is very dangerous.”

(Additional reporting by Lidia Kelly and Justyna Pawlak in Warsaw and Tatiana Jancarikova in Bratislava; Editing by Gareth Jones)