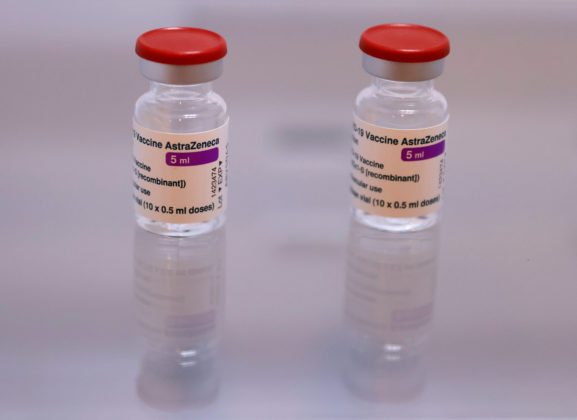 FILE PHOTO: Vials of the Oxford-AstraZeneca COVID-19 vaccine is seen in the fridge of a doctor's office in Gouzeaucourt as part of the coronavirus disease (COVID-19) vaccination campaign in France, February 24, 2021. REUTERS/Pascal Rossignol

BRUSSELS (Reuters) – The European Commission said on Tuesday that it was considering emergency approvals for COVID-19 vaccines as a faster alternative to more rigorous conditional marketing authorizations which have been used so far.

The move would mark a big shift in approach to vaccine approvals, as it would entail using a procedure that the EU had considered dangerous and that before the COVID-19 pandemic had been reserved for exceptional authorization at national level of drugs for terminally ill patients, including cancer treatments.

The potential change comes as the EU executive and the bloc’s drug regulator come under increasing pressure for what some consider slow vaccine approvals, which have contributed to a slower rollout of COVID-19 shots in the 27-nation union, compared to the United States and former EU member Britain.

“We are ready to reflect with the member states on all possible avenues to indeed accelerate the approval of the vaccines,” an EU Commission spokesman told a news conference after the matter was discussed earlier on Tuesday at a COVID-19 meeting with EU Commission President Ursula von der Leyen.

One option could be “an emergency authorization of vaccines at EU level with shared liability among member states,” the spokesman said, adding that work on this could start very quickly if EU governments supported the idea.

It was not clear whether an EU-wide emergency authorization procedure, if agreed upon, would entail the same conditions as emergency approvals granted at national level, the commission spokesman told Reuters.

The European Medicines Agency (EMA) cannot currently issue emergency approvals but in exceptional circumstances has recommended the compassionate use of drugs before marketing authorization.

This procedure was used in April to initially authorize doctors to use Gilead’s antiviral drug remdesivir as a treatment against COVID-19. The drug was later given conditional approval by EMA.

National emergency approvals are allowed under EU laws, but they force countries to take full responsibility if something goes wrong with a vaccine, whereas under the more rigorous marketing authorization, pharmaceutical companies remain liable for their vaccines.

The EU Commission had said that national emergency authorizations should not be used for COVID-19 vaccines because faster approvals could reduce regulators’ ability to check efficacy and safety data.

This could also boost vaccine hesitancy, which is already high in some countries, EU officials had said.

One senior EU official said the emergency procedure had so far usually been used at national level for terminally ill patients and the EU had instead chosen the lengthier conditional marketing authorization because with vaccines “we inject healthy people” and the risk was disproportionate.

The change of tack would come after Eastern European countries, including Hungary, Slovakia and the Czech Republic, approved or said they were considering approval of Russian and Chinese vaccines with national emergency procedures.

The EU Commission also said last month it was working on a possible fast-track approval of upgraded anti-variant vaccines, which had already been authorized and would need fewer comprehensive checks before they are made available to the public.