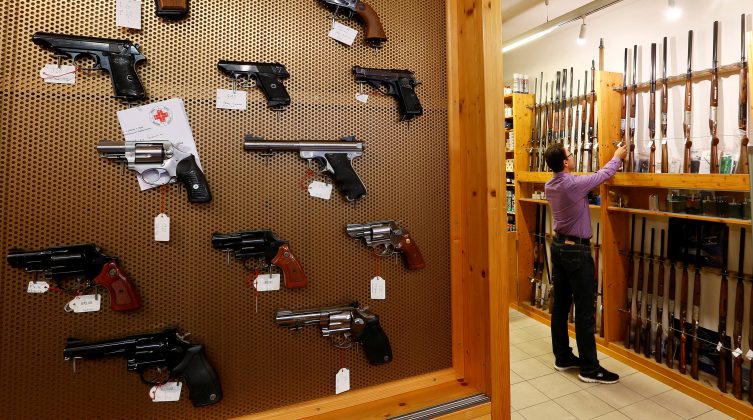 Handguns and sporting guns are displayed at Wyss Waffen gun shop in the town of Burgdorf, Switzerland August 10, 2016. REUTERS/Arnd Wiegmann

By John Miller and Caroline Copley

ZURICH/BERLIN (Reuters) – Europeans in a number of countries are seeking to arm themselves with guns and self-defense devices in growing numbers following a series of attacks by militants and the mentally ill.

Some weapons sellers also link their increased business to the arrival of huge numbers of migrants in Europe, although a German police report stated that the vast majority do not commit crimes of any kind in the country.

The picture is patchy, with no up-to-date data available at a European level, leaving national and regional authorities to release statistics that are far from comprehensive and not always comparable. Reasons also vary for civilians to own guns legally, including hunting and sport as well as self-protection.

Nevertheless, applications for gun permits are climbing in Switzerland, Austria and the Czech Republic. Their larger neighbor Germany has not followed the trend in lethal firearms, but permits for carrying devices designed to scare off assailants, such as blank guns and those that fire pepper spray, have risen almost 50 percent.

FACTBOX on trends in weapons permits:

Little research into the reasons for the recent apparent trend has yet been published, but the assumption is that attacks in the past year including in Paris, Brussels, Nice and Munich have stirred fear among some citizens.

“There’s no official explanation for the rise, but in general we see a connection to Europe’s terrorist attacks,” said Hanspeter Kruesi, a police spokesman in the Swiss canton of St. Gallen.

Kruesi advised against buying weapons, saying they did little to improve citizens’ security while presenting problems over safe storage and raising legal questions over their proper use in a conflict. “People could actually make themselves criminally liable,” he said.

After he spoke to Reuters, the canton was the scene of an attack aboard a train this month. The suspect and a woman victim died later, although police said his motive was unclear.

One Swiss resident who has just bought his first ever weapons – a pistol and a pump-action shotgun – pinned his decision on a feeling of insecurity created by the attacks combined with criminality that he blamed on north Africans, as well as concern over recent break-ins in his neighborhood.

“Buying weapons for self-defense won’t protect you from terrorist attacks,” said the 55-year-old who lives in a town near the capital, Bern.

“Nevertheless these attacks are contributing to a subjective sense of threat, as is the rising pressure from migration and the high crime rate among migrants from the Maghreb,” he said, requesting anonymity due to concerns about his safety.

Figures are hard to come by on whether the rate of crime, serious or petty, is higher among migrants than the general population in Europe.

The report from the BKA federal police in Germany – where more than a million people fleeing violence and poverty arrived last year – said migrants committed or tried to commit about 69,000 crimes in the first quarter of 2016. However, it did not say how this compared with the overall number of crimes.

‘THE SUM OF THESE EVENTS’

Like Kruesi, authorities in Europe – where levels of gun ownership are comparatively low and controls are often tight – have avoided encouraging their citizens to buy weapons.

But Czech President Milos Zeman broke ranks after an 18-year-old with a history of mental illness killed nine people in Munich in July. “Citizens should be able to arm themselves … in order to be able to act against these terrorists,” he told TV Nova.

Czechs may already be doing so. Gun permit holders grew by almost 6,000 to close to 300,000 in the first five months of 2016 after several years of declines.

In Switzerland, the land of the legendary crossbow marksman William Tell, a rising trend emerged last year. Of the country’s 26 cantons, the 12 that responded to a Reuters inquiry all reported higher 2015 applications for permits entitling people to buy guns. Interim 2016 figures show a further rise.

While those from people with serious criminal convictions or suffering from mental illness are rejected, most are granted.

“Nobody says directly: I’m buying a gun because of the attacks in Nice or Munich,” said Daniel Wyss, president of the Swiss weapons dealers’ association who runs his own gun shop. “But the sum of these events has fostered a general feeling of vulnerability.”

Switzerland’s defense relies heavily on tens of thousands of citizen soldiers who store their automatic rifles at home, but almost no civilians have the right to carry loaded guns in public.

Some people want this changed. Jean-Luc Addor, a parliamentarian and member of the Swiss gun lobby, aims to introduce legislation in September to ease the restrictions.

Addor contends that more armed civilians mean safer streets. “The state is not equipped to guarantee public safety,” he said. “Sometimes citizens – not every citizen, but those who have appropriate training – should be given means to protect themselves and their families.”

AN EROSION OF TRUST?

Suggestions that governments might be falling short in their duties have also surfaced in Germany.

Ingo Meinhard, head of the German association of gunsmiths and specialist gundealers, said demand for blank guns and pepper spray jumped after sexual assaults on women at New Year in the city of Cologne. These were blamed largely on migrants.

Meinhard said demand subsequently fell off but rose again after three fatal attacks in July, including by an Islamic State sympathizer who detonated a bomb near a German music festival. “We’re now noticing high demand in urban areas,” he added.

Police drew heavy criticism for failing to prevent the Cologne incidents, since which an Iraqi and an Algerian have been convicted of sexual assault.

German permits for firearms possession have fallen marginally in the past year, while those for scare devices jumped 49 percent in the year to June to 402,301.

No permit is required for pepper spray aerosols marketed as a protection against animals such as aggressive dogs, though officials say anyone who uses them on humans could get into trouble with the law.

Dagmar Ellerbock, a history professor at Technische Universitaet Dresden, said the New Year incidents may have prompted Germans to question the authorities’ competence.

“This trend towards self-defense could be a reason to worry if it signals an erosion of trust, that citizens who experienced the assaults in Cologne no longer feel safe or protected by the state,” she said.

Gun sellers said weapons interest grew in Austria after large numbers of migrants arrived in the country at the northern end of the now closed ‘Balkan Route’. “Fear is very much a driving force,” said Robert Siegert, a gunmaker and the weapons trade spokesman at the Austrian Chamber of Commerce “That’s what we keep hearing from salespeople in shops.”

Gun ownership remains low in Europe. According to the Geneva-based group Small Arms Survey, the United States easily surpasses the continent in per capita terms.

There are over 100 guns per 100 U.S. residents, more than twice the figure for Switzerland and three times that for Austria, Germany and France.

France requires background checks for those seeking a weapon for the two purposes it considers legitimate: hunting or joining a shooting club. This scrutiny can take more than a year.

“Gun ownership is extremely regulated, getting there is like an obstacle course,” he said. “We don’t have the same mindset as Americans.”

Gun control laws in Britain, which has also experienced a number of Islamist militant attacks in recent years, have been strict since a school massacre in 1996. Licensed firearms numbers in England and Wales have remained relatively stable in the past year.

Even in the self-defense business, some doubt the benefits of a personal arsenal. Marco Schnyder, who runs a training center in Zurich, said knowing how to restrain an assailant was better.

“I have people in my shooting classes who want to protect their families or themselves,” he said. “They would be better served getting a watchdog or an alarm system. I tell them that, too.”