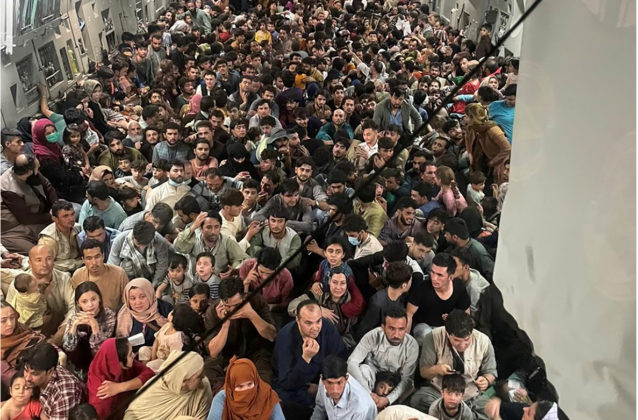 KABUL (Reuters) -U.S. military flights evacuating diplomats and civilians from Afghanistan restarted on Tuesday after the runway at Kabul airport was cleared of thousands desperate to flee following the Taliban’s sudden takeover of the capital.

The number of civilians had thinned out, a Western security official at the airport told Reuters, a day after chaotic scenes in which U.S. troops fired to disperse crowds and people clung to a U.S. military transport plane as it taxied for take-off.

At least 12 military flights had taken off, a diplomat at the airport said. Planes were due to arrive from countries including Australia and Poland to pick up their nationals and Afghan colleagues.

As they rush to evacuate civilians, foreign powers are also assessing how to respond to the new rulers in Kabul and also how to deal with refugees trying to flee the country.

Turkish Foreign Minister Mevlut Cavusoglu said the country was in talks with all parties in Afghanistan, including the Taliban, and was positive on their statements since they took control.

Under a U.S. troops withdrawal pact struck last year, the Taliban agreed not to attack foreign forces as they leave.

U.S. forces took charge of the airport – their only way to fly out of Afghanistan – on Sunday, as the militants wound up a week of rapid advances by taking over Kabul without a fight, 20 years after they were ousted by a U.S.-led invasion.

Flights were suspended for much of Monday, when at least five people were killed, witnesses said. Media reported two people fell to their deaths from the underside of a U.S. military aircraft after it took off.

U.S. troops killed two gunmen who appeared to have fired into the crowd at the airport, a U.S. official said.

U.S. President Joe Biden defended his decision to withdraw U.S. forces after 20 years of war – the nation’s longest – which he described as costing more than $1 trillion.

But a video of hundreds of desperate Afghans trying to clamber on to a U.S. military plane as it was about to take off could haunt the United States, just as a photograph in 1975 of people trying to get on a helicopter on a roof in Saigon became emblematic of the humiliating withdrawal from Vietnam.

Biden said he had to decide between asking U.S. forces to fight endlessly or follow through on a withdrawal agreement negotiated by his predecessor, Republican Donald Trump.

“I stand squarely behind my decision,” Biden said. “After 20 years I’ve learned the hard way that there was never a good time to withdraw U.S. forces. That’s why we’re still there.”

Facing criticism from even his own diplomats, he blamed the Taliban’s takeover on Afghan political leaders who fled and its army’s unwillingness to fight.

The Taliban captured Afghanistan’s biggest cities in days rather than the months predicted by U.S. intelligence. In many cases, demoralised government forces surrendered despite years of training and equipping by the United States and others.

The Taliban began their push in the spring with attacks on government positions in the countryside and targeted killings in cities. The International Committee of the Red Cross said more than 40,000 people with wounds caused by weapons had been treated at facilities it supports in June, July and August, 7,600 of them since Aug. 1.

U.S. forces are due to complete their withdrawal by the end of this month under the deal with the Taliban that hinged on their promise not to let Afghanistan be used for international terrorism.

That day, some 640 Afghans crammed into a U.S. C-17 transport aircraft to fly to Qatar, a photo taken inside the plane showed.

The U.N. Security Council called for talks to create a new government in Afghanistan after Secretary General Antonio Guterres warned of “chilling curbs” on human rights and violations against women and girls.

During the Taliban’s 1996-2001 rule, women could not work and punishments such as public stoning, whipping and hanging were administered.

The Taliban have said there will be no retribution against opponents and promised to respect the rights of women, minorities and foreigners, but many Afghans are skeptical and fear old enemies and activists will be rounded up.

The top U.N. human rights official voiced concern about the safety of thousands of Afghans who have worked on human rights. The U.N. refugee agency called for a halt to forced returns of Afghans including asylum seekers whose requests had been rejected.