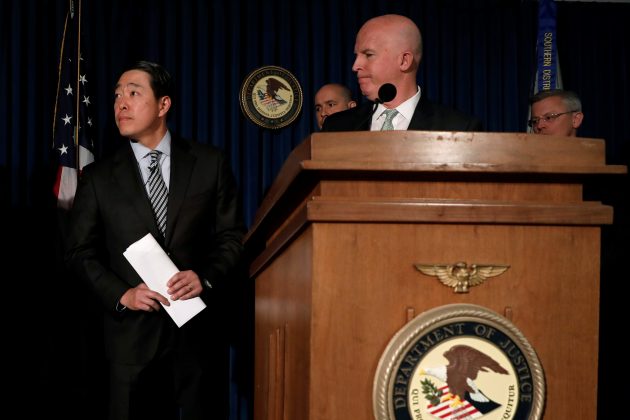 (Reuters) – Three retired New York City police officers and a former Brooklyn prosecutor were arrested Tuesday on charges that they took part in a bribery scheme involving gun licenses, becoming the latest people caught up in a wide-ranging corruption probe.

Federal prosecutors say that Paul Dean, 44, and Robert Espinel, 47, took bribes in exchange for approving gun licenses while they were working in the police department’s gun licensing division. Both retired last year, according to prosecutors.

The bribes included cash, paid vacations, expensive liquor and thousands of dollars worth of services at a strip club, according to a criminal complaint unsealed on Tuesday.

Gaetano Valastro, 58, a retired police detective who owned a gun store in the borough of Queens, was charged on Tuesday with paying bribes, including cash and free guns, to Dean, Espinel and another officer, Richard Ochetal, who pleaded guilty last year.

John Chambers, 62, a lawyer who worked as a prosecutor in Brooklyn in the 1980s, is charged with paying bribes to David Villanueva, another officer in the licensing division.

Villanueva was arrested last year. Documents unsealed on Tuesday show that he has pleaded guilty and is cooperating with prosecutors.

Acting U.S. Attorney Joon Kim said at a news conference on Tuesday that over 100 licenses were issued as a result of the scheme, including to people with criminal histories.

The charges over gun licensing were part of a broader federal investigation that resulted in charges in June against two high-ranking police officials for accepting lavish benefits from a pair of politically connected businessmen for favors.

At least two others have pleaded guilty to paying bribes for gun licenses. Alex Lichtenstein, a member of a volunteer safety patrol in an Orthodox Jewish community in Brooklyn, has been sentenced to 32 months in prison.

Another man, Frank Soohoo, is cooperating with authorities, according to newly unsealed documents.