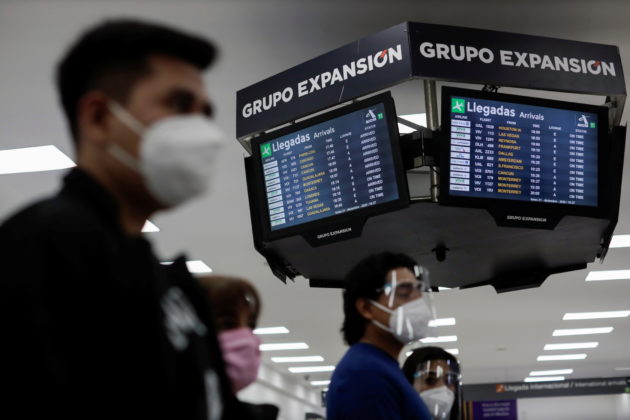 A flight information screen displays the arrivals and delayed flights, including the one from London, as the Mexico's government analyses to suspend flights from the U.K. due to fears about a highly infectious new coronavirus strain amid the coronavirus disease (COVID-19) outbreak, at the Benito Juarez International Airport, in Mexico City, Mexico December 21, 2020. REUTERS/Luis Cortes

SAN FRANCISCO/MEXICO CITY (Reuters) -Mexico is considering setting tougher entry requirements for Venezuelans, partly in response to U.S. requests, after a sharp rise in border arrests of Venezuelans fleeing their homeland, according to three people familiar with the matter.

Currently, Venezuelans do not need a visa to enter Mexico as tourists. But as apprehensions of Venezuelan migrants on the U.S.-Mexico border soar, Mexico is looking at making their entry subject to certain criteria, a Mexican official familiar with the government’s internal discussions said.

New entry rules could be applied soon, the official said.

A second Mexican government source said Mexico was reviewing its options, and holding discussions with Venezuela to explore alternatives to imposing visa requirements.

A third person familiar with Mexican-U.S. talks said Washington is urging Mexico to impose visa restrictions on Venezuelans, noting that U.S. Customs and Border Protection (CBP) has been complaining about the increase in Venezuelans.

Options under review include making Venezuelans show they are economically solvent and in employment, and have a return plane ticket when they enter in order to ensure they are not using Mexico to enter the United States, the first source said.

A U.S. State Department spokesperson said Washington was working with Mexico to address root causes of irregular migration in a “collaborative, regional approach” when asked by Reuters whether the Biden administration was pressing Mexico to tighten entry requirements for Venezuelans.

“The United States appreciates Mexico’s efforts that contribute to safe, orderly, and humane processes for migrants at and within its borders,” the spokesperson said.

The discussions come as encounters of Venezuelans at the U.S.-Mexico border have leapt to 47,762 in the year through September from just 1,262 during the previous 12-month period, according to U.S. government data.

Total apprehensions of migrants at the U.S.-Mexico border have hit record levels this year. That has put pressure on U.S. President Joe Biden ahead of congressional elections next November, with many voters in Texas border towns upset https://www.reuters.com/world/us/migrants-school-buses-texas-town-feels-caught-middle-2021-09-21 and Republicans accusing his administration of pursuing an “open border” policy.

One of the Mexican sources said Washington had lobbied Mexico to slow arrivals from Venezuela, but that Mexico also wanted to make sure people were not entering on false pretenses.

A fourth source, in U.S. government, said efforts to lobby Mexico to tighten entry requirements from OPEC member Venezuela had increased since Venezuelan arrivals jumped this summer, and that requests for cooperation had been made informally by diplomats and the DHS. The source said Washington was not leaning hard on Mexico.

Tighter entry rules could seriously affect migration plans of many Venezuelans, who pay smuggling networks to help them escape economic devastation under President Nicolas Maduro, who has presided over a severe financial meltdown amid heavy U.S. sanctions. Many of the Venezuelans depart with little money.

Venezuelans arriving from elsewhere in Latin America like Colombia or Chile, where they often work for a few years to save in hard currency before heading north, would likely be less exposed to requirements centering on their solvency.

“Venezuelan migrants and refugees are fleeing a complex humanitarian emergency, lack of justice, an absence of freedom, and violence,” said David Smolansky, an exiled Venezuelan opposition leader who coordinates the Organization of American States’ response to Venezuela’s migration crisis. “In the face of such a situation, it is fundamental that they receive protection.”

Reuters reported in October that the Biden administration wanted Mexico to impose visa requirements on Brazilians to complicate their path to the U.S. border. And in September, Mexico suspended visa exemptions for Ecuadorians for six months following a steep increase in that country’s nationals trying to cross the U.S. border.