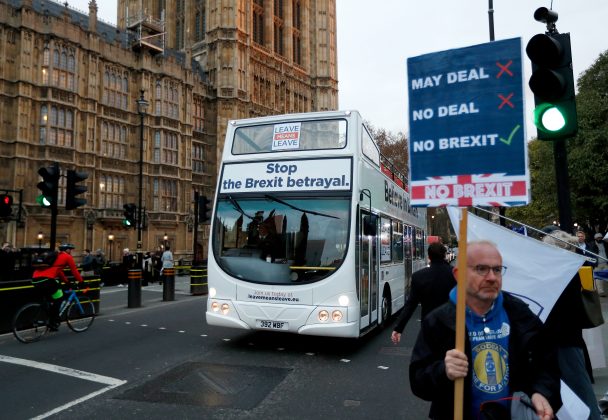 FILE PHOTO: A bus with a pro-Brexit message passes an anti-Brexit demonstrator outside the Houses of Parliament in London, Britain, December 10, 2018. REUTERS/Peter Nicholls

LONDON (Reuters) – The United Kingdom is due to leave the European Union on March 29, 2019. The date is set in law – the 2018 Withdrawal Act – but the divorce has been plunged into chaos.

Below is an explainer of the Brexit basics:

A blending of “Britain” and “exit,” it is the description of the United Kingdom’s decision to leave the European Union. The word was coined by former lawyer Peter Wilding four years before the vote took place.

The EU, initially an attempt to tie Germany and France together and prevent another major European war, is now a group of 28 countries which trade and allow their citizens to move between the countries to live and work.

The campaign was among the most divisive waged in Britain with accusations of lying and scare-mongering on both sides.

Supporters of remaining in the EU were accused of exaggerating threats to the economy. The pro-Brexit camp was accused of misleading voters about how much extra money could be spent on healthcare and stoking fears about immigration.

A week before the vote, a pro-EU member of parliament died after being stabbed and shot in the street.

WHY DOES IT MATTER?

Pro-Europeans fear Britain’s exit will weaken the West as it grapples with Donald Trump’s unpredictable U.S. presidency and growing assertiveness from Russia and China. It weakens Europe’s economy and removes one of its only two nuclear powers.

A disorderly Brexit would hammer the United Kingdom’s economy, the world’s fifth largest, and could disrupt trade in Europe and beyond. The shock of a chaotic Brexit would roil financial markets.

Brexit supporters say while there may be some short-term disruption, in the long-term the UK will thrive outside what they cast as a doomed experiment in German-dominated unity and excessive debt-funded welfare spending.

HOW DID WE GET HERE?

The vote to leave the EU followed decades of discussion about how close the United Kingdom should be to the bloc.

Britain refused to join the forerunner to the EU, the European Economic Community when it was founded in 1957. When it did decide to join, its attempts were vetoed twice by France.

The UK became a member in 1973, only to have a crisis of confidence that led to an exit referendum two years later. Britons voted 67 to 33 percent to stay in the club in 1975.

Former Prime Minister Margaret Thatcher threatened to halt payments to the EU unless Britain got a refund. But her opposition to greater European integration led to her being ousted in a party coup.

In an attempt to end splits in his Conservative Party, the former Prime Minister David Cameron held the 2016 “in-out” referendum.

Supporters of Brexit. They say leaving will give the United Kingdom back control over its own destiny and allow it to exploit global economic opportunities beyond Europe.

They argue the United Kingdom will save billions of pounds in membership fees, regain control of its economic policies and regulations and the right to restrict immigration from countries in the EU.

Opponents of Brexit. They say leaving will hammer the British economy and diminish the United Kingdom’s global clout.

As a bloc, the EU is Britain’s most important trading partner and its greatest source of foreign direct investment. Remainers say an exit will disrupt trade and dislocate supply chains in Europe and beyond.

SO WHY THE CHAOS?

After months of negotiation, British Prime Minister Theresa May reached agreement on the terms of Britain’s departure with EU leaders. But her plan to accept EU customs rules on goods while ending free movement of people has drawn criticism from both pro-Brexit and pro-EU lawmakers, the Northern Irish DUP party, which props up her minority government, and members of the opposition.

May says the choice before parliament is her deal, no deal or no Brexit.

CAN BREXIT BE STOPPED?

The lack of support in parliament for May’s divorce deal has stirred interest in the possibility that Britain may hold a second vote on whether to stay or leave.

May has ruled out a second referendum. The main opposition Labour Party is also skeptical, fearing another vote would divide supporters.

If Parliament did agree to hold another referendum, Britain would have to ask for an extension to the timetable for leaving the EU to allow enough time to hold the vote.