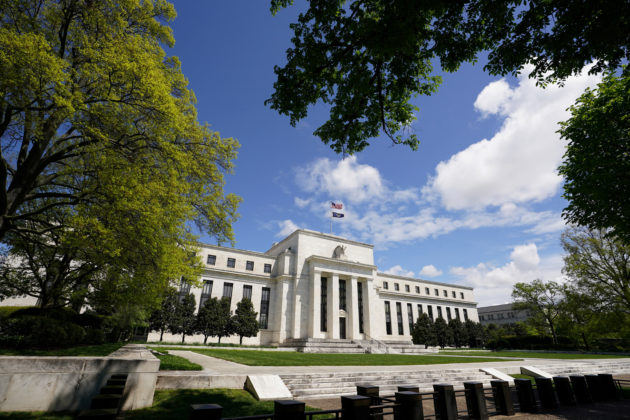 FILE PHOTO: The U.S. Federal Reserve building is set against a blue sky amid the coronavirus pandemic in Washington, U.S., May 1, 2020. REUTERS/Kevin Lamarque/File Photo

SAN FRANCISCO (Reuters) – U.S. Federal Reserve policymakers on Wednesday will publish their first economic projections since the coronavirus pandemic set off a recession in February, estimates expected to signal a collapse in output this year and near-zero interest rates for the next few years.

They’ll also give shape to the range of views at the U.S. central bank about the expected speed of the recovery and any longer-term damage to the world’s biggest economy from a pandemic that has so far killed nearly 111,000 Americans and prompted unprecedented restrictions on commerce and movement to slow its spread.

Here is a guide to what the projections may show and what questions they may raise about the future of the U.S. economy as authorities lift those restrictions.

Every three months, each of the Fed’s 17 policymakers develops a set of multi-year forecasts for U.S. unemployment, inflation, economic growth and interest rates. The projections are published in summary form at the end of the policy-setting meeting. The Fed did not release a quarterly summary of economic projections in March, however, because of massive uncertainty about the spread of the novel coronavirus, the resulting lockdowns, and the economic fallout. Though plenty is still uncertain, one thing is clear: the projections on Wednesday will be starkly worse than the Fed’s largely favorable outlook in December. (Please see graphic )

DOES THIS HAVE ALL THOSE DOTS?

Yes. The projections’ centerpiece is the so-called dot plot, a graphic representation of where each unnamed policymaker sees interest rates in coming years. This collection of rate-setters’ individual views has also occasionally functioned as a loose policy promise about the path of rates. This is one of those times. The Fed has signaled it will keep its key overnight lending rate near zero until the recovery is well underway. The dots, which will likely show most Fed policymakers expect no change in rates through 2022, “could be seen as a soft way of reinforcing that guidance,” said Michael Feroli, chief U.S. economist at JP Morgan.

HOW DEEP, HOW LONG?

With states in various stages of reopening after weeks or more of stay-at-home orders that precipitated the recession, the Fed policymakers’ forecasts will map their sense of how quick the recovery will be.

“The Fed likely forecasts a strong rebound in growth in H2, but the level of GDP will remain well below the pre-coronavirus level until late 2021” Oxford Economics’ Kathy Bostjancic wrote. Her view was widely echoed by other economists.

The U.S. unemployment rate, which fell unexpectedly to 13.3% in May, may be projected to end this year in double digits and remaining well above healthy long-run levels next year. The Fed will likely project inflation to undershoot its 2% target for the foreseeable future, Bostjancic and others say.

Importantly, the Fed’s summary of projections reflects what policymakers see as the most likely path for the economy, which for many does not factor in a second wave of infections – a key unknown for now.

But deaths from COVID-19, the respiratory illness caused by the novel coronavirus, continue to increase in many U.S. states, and public health officials have flagged the possibility of further spread after crowded Memorial Day celebrations in parts of the country in late May and ongoing mass protests against racial inequalities since the May 25 death of George Floyd, a black man, in police custody in Minneapolis.

“The risk to our forecast, and likely the Fed’s, is skewed to the downside,” Bostjancic said.

The economic projections being released on Wednesday will also offer insight into whether Fed officials see the pandemic as inflicting permanent damage on the economy. Nomura economist Lewis Alexander projects little change to the Fed’s earlier estimate that the economy can sustain about 1.9% yearly growth in the long run, along with 4.1% unemployment, though both could erode. More broadly, he said, “it is important to emphasize the significant amount of uncertainty” around the forecasts.