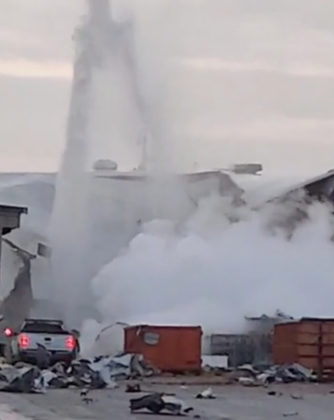 Gas and liquid gushes into the air after a nitrogen tank explosion at a Textron Aviation Inc. Beechcraft facility in Wichita, Kansas, U.S., December 27, 2019 in this still image obtained from social media video. Shane Haberlein via REUTERS

(Reuters) – At least 15 people were injured on Friday after a liquid nitrogen line exploded at a Textron Aviation plant near Wichita, Kansas, potentially setting back the launch of a new aircraft under development, county and company officials said.

Company officials said two of victims went to the hospital in private cars and two were treated at the scene.

Injuries were limited because only a skeleton crew was on duty during the holidays, said Deputy Chief Daniel Wegner of the Sedgwick County Fire Department.

The explosion in a 3-inch liquid nitrogen gas line also damaged a storage tank, causing nitrogen gas to vent out of the building, Wegner said.

News video from the scene showed what appeared to be a steam cloud billowing out of the damaged building. The gas was not harmful, Wegner said.

A second valve also ruptured, said Kate Flavin, a spokeswoman for Sedgwick County, and emergency crews vented nitrogen gas from the affected tanks before doing another search of the plant.

No others were found injured and control of the facility was returned to Textron shortly after noon, but emergency crews remained on standby at the scene, she said.

Damage was contained to Plant 3, a site for composite manufacturing and experimental aircraft fabrication including that of the SkyCourier, said Stephanie Harder, a spokeswoman for Textron.

The SkyCourier, a utility turboprop under development, is due to enter service in 2020, Textron has previously said. Harder said it was too early to determine what damage the prototype aircraft under production may have suffered.

The Wichita-area economy has long been supported by aircraft manufacturing. Boeing Co <BA.N> announced in January it would suspend production of its 737 Max jetliner, which has been grounded worldwide after two fatal crashes. That move affected workers at Spirit AeroSystems in Wichita, Boeing’s top supplier, which produces the jet’s fuselages.