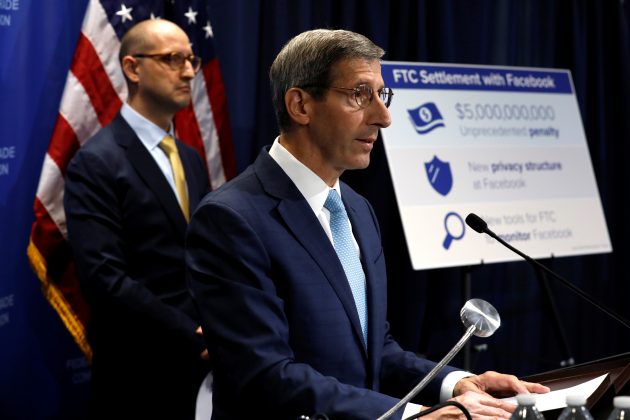 WASHINGTON (Reuters) – Facebook Inc will pay a record-breaking $5 billion fine to resolve a government probe into its privacy practices and the social media giant will restructure its approach to privacy, the U.S. Federal Trade Commission said on Wednesday.

The FTC voted 3-2 along party lines to adopt the settlement, which requires court approval. The Republican commissioners called the settlement “a complete home run” that exceeded any award the commission could have gotten in court. Democratic commissioners said it did not go far enough or require a large enough fine.

“Would it have been nice to get more, to get $10 billion, instead of $5 billion for example, to get greater restrictions on how Facebook collects uses and shares data?” he asked at a press conference. “We did not have those options. We cannot impose such things by our own fiat.”

Facebook confirmed it would pay the $5 billion fine and said the FTC deal would provide “a comprehensive new framework for protecting people’s privacy.” Its share price fell about 1% on Wednesday morning to trade at $200.39.

Democratic FTC Commissioner Rohit Chopra complained that the penalty provided “blanket immunity” for Facebook executives “and no real restraints on Facebook’s business model” and does “not fix the core problems that led to these violations.”

Facebook agreed to pay an additional $100 million to settle allegations that it misled investors about the seriousness of its misuse of users’ data, the Securities and Exchange Commission said.

Under the FTC settlement, Facebook’s board will create an independent privacy committee that removes “unfettered control by Facebook CEO Mark Zuckerberg over decisions affecting user privacy.”

Facebook also agreed to exercise greater oversight over third-party apps, and said it was ending access to friend data for Microsoft Corp and Sony Corp.

The Republican majority on the FTC said the settlement “significantly diminishes Mr. Zuckerberg’s power — something no government agency, anywhere in the world, has thus far accomplished.”

Under the deal, Zuckerberg and other Facebook executives must sign quarterly certifications attesting to privacy practices. The FTC said Zuckerberg or others filing a false certification could face civil and criminal penalties.

Facebook also is barred from asking for email passwords to other services when consumers sign up. It is barred from using telephone numbers for advertising if they are obtained in a security feature like two-factor authentication. The company must also get user consent to use facial recognition data.

Facebook said it may find additional problems as it initiates a review of its systems and warned it will take longer to roll out updates as it plans to use “hundreds of engineers and more than a thousand people across our company to do this important work.”

“As part of this settlement, we’re bringing our privacy controls more in line with our financial controls,” Zuckerberg said in a Facebook post. “Going forward, when we ship a new feature that uses data, or modify an existing feature to use data in new ways, we&rsquo;ll have to document any risks and the steps we’re taking to mitigate them.”

Senator Richard Blumenthal of Connecticut was one of several Democratic lawmakers who criticized the settlement, calling it “a fig leaf” that offers “no accountability for top executives.”

“By relying on a monetary fine to deter Facebook, the FTC has failed to heed history’s lessons. Facebook has already written this penalty down as a one-time-cost in return for the extraordinary profits reaped from a decade of data misuse,” said Blumenthal.

Facebook’s legal issues may not be over. On Tuesday, the U.S. Justice Department said it was opening a broad investigation of major digital technology firms into whether they engage in anti-competitive practices.

The department did not identify specific companies but said the review would consider concerns raised about “search, social media, and some retail services online.” Leaders in those areas include Google parent Alphabet Inc, Amazon.com Inc, Facebook and possibly Apple Inc.

The Republican commissioners led by Simons said if the FTC had gone to court “it is highly unlikely that any judge would have imposed a civil penalty even remotely close to this one.”

The Democrats on the FTC complained that the $5 billion penalty may be less than Facebook’s gains from violating users’ privacy. “Until we address Facebook’s core financial incentives for risking our personal privacy and national security, we will not be able to prevent these problems from happening again,” Chopra said.

His fellow Democratic commissioner, Rebecca Slaughter, said the FTC should have taken Facebook and Zuckerberg to court. She also criticized the FTC’s decision to grant Facebook and its executives a release from liability for any claims that prior to June 12, 2019 it violated the earlier FTC settlement.

Slaughter said the FTC failed “to impose any substantive restrictions on Facebook’s collection and use of data from or about users.”

Chopra said the settlement means “the commission — and the public — may never find out what Facebook knows… It is difficult to conclude that the commission got the better end of the bargain.”