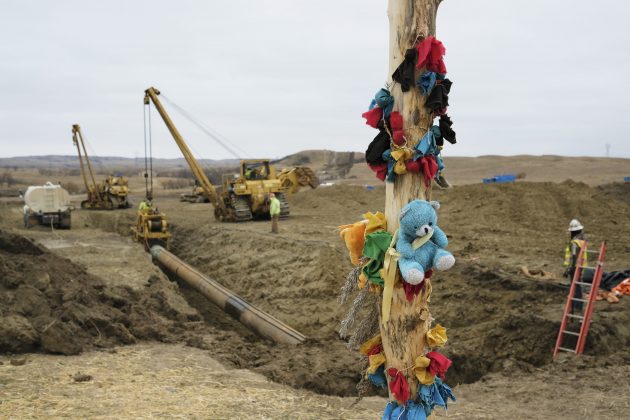 A log adorned with colorful decorations remains at a Dakota Access Pipeline protest encampment as construction work continues on the pipeline near the town of Cannon Ball, North Dakota, U.S., October 30, 2016. REUTERS/Josh Morgan

By Timothy Mclaughlin and Amy Tennery

(Reuters) – Thousands of supporters of a Native American tribe and environmental activists fighting construction of an oil pipeline in North Dakota turned to social media on Monday in a bid to confuse police who they believe are using it to track the protesters.

More than 4,600 people used Facebook’s location tagging feature to “check in” on Monday afternoon at the Standing Rock Indian Reservation, near the site of the $3.8 billion Dakota Access pipeline, vastly boosting the numbers actually there.

The local sheriff’s department denied it is using social media to keep tabs on demonstrators, and said the online actions by the protesters’ supporters were unnecessary.

“The Morton County Sheriff’s Department is not and does not follow Facebook check-ins for the protest camp or any location. This claim/rumor is absolutely false,” Donnell Preskey, a spokeswoman for the department, said in an email.

The Standing Rock Sioux Tribe and other opponents say the pipeline threatens sacred sites and local water supplies. Supporters say it would be safer and more cost-effective than transporting oil by road or rail. The 1,172-mile (1,885-km) pipeline is being built by a group of companies led by Energy Transfer Partners LP.

The vast majority of new check-ins at the site in rural southwestern North Dakota appear to have been made remotely.

Ironically, using social media from the protest camp is hard due to poor cellphone reception. To get a signal, people walk up a small mound that has been dubbed “Facebook Hill.”

Variations on the search term “check in at Standing Rock” were among the most popular searches on Facebook on Monday afternoon, with more than 10,000 people talking about them.

Mekasi Camp Horinek, a protest leader from Bold Oklahoma, an environmental advocacy group, said he did not know who started the online movement, but he welcomed it.

“It is a lot of people showing their support for Standing Rock,” Horinek said on Monday by telephone from North Dakota. “They can’t be with us here physically, but they are with us in spirit and prayer.”

Horinek was among the 142 protesters arrested by police last week at an encampment set up on private land.

There were also demonstrations at banks linked to the pipeline’s financing on Monday. Twelve people were arrested in San Francisco for demonstrating in the Citigroup Center, according to protest organizers, and demonstrators occupied the lobby of the Wells Fargo Center in Salt Lake City.

(Reporting by Timothy Mclaughlin in Chicago and Amy Tennery in New York; Additional reporting by Ernest Scheyder in Houston and Devika Krishna Kumar in New York; Editing by James Dalgleish)