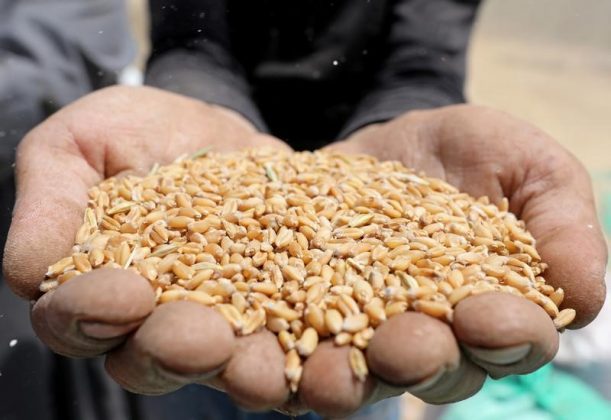 A farmer holds wheat grains on a field in the El-Menoufia governorate, north of Cairo, Egypt May 16, 2017. REUTERS/Mohamed Abd El Ghany

Al-Banna said the cargoes from France and Romania would be sieved before a decision was taken on whether to allow them into the country.

The world’s biggest wheat buyer has panicked global suppliers in recent weeks by referring the two cargoes to its public prosecutor for containing what it said were drug-producing poppy seeds. The prosecutor has yet to issue a final decision on whether the wheat should be re-exported.

Supplier Transgrain France and the French embassy in Cairo sent letters to state-buyer GASC arguing that the strand of poppy, papaver rhoeas, in the wheat was a harmless variety not used in opium production and commonly found in wheat fields.

Banna’s comments are the first by an Egyptian official to take a similar view. He said the seeds were “not very dangerous”, and that “there is still a study that has not been completed to determine whether to re-export it to the country of origin or use it after the sieving.”

GASC later said it had determined that the seeds present in the Romanian cargo were not harmful as per an agriculture quarantine report and that it would be sieved.

“The poppy seeds found on the Romanian vessel according to a report that was signed by the head of the agriculture quarantine are not of the harmful opiate kind. The procedure therefore is sieving,” GASC Vice Chairman Ahmed Youssef told Reuters.

Traders are watching closely, and have said that any rejection could lead them to boycott the state’s massive tenders, protesting what they describe as excessive inspection measures that have made doing business increasingly risky.

“All suppliers will wait and see what will happen,” said one Cairo-based trader.

In a similar trade row last year, Egypt temporarily banned any trace of ergot, a common grain fungus, in cargoes. That move halted the country’s billion-dollar grain trade after suppliers said the zero-tolerance level was impossible to guarantee.

GASC expects to buy about 7 million tonnes of wheat in the fiscal year that began last July in order to supply a bread subsidy program relied on by tens of millions of Egyptians.

Inspectors from Egypt’s agriculture quarantine service have slammed a food inspection system launched this year that was intended to streamline trade following the ergot dispute.

They say the new system, which ends the process of sending Egyptian inspectors abroad to check on grain, has allowed harmful contaminants to enter the country. They successfully challenged the system in court, but a verdict to suspend it has not been implemented and is being appealed.

“We are being exposed to the biggest campaign to enter the largest quantities possible of poor quality wheat into Egypt and to make it the wastebasket of the world,” a quarantine inspector said.

(Reporting by Maha El Dahan in Dubai and Eric Knecht in Cairo; Writing by Eric Knecht; Editing by Susan Thomas and Mark Potter)