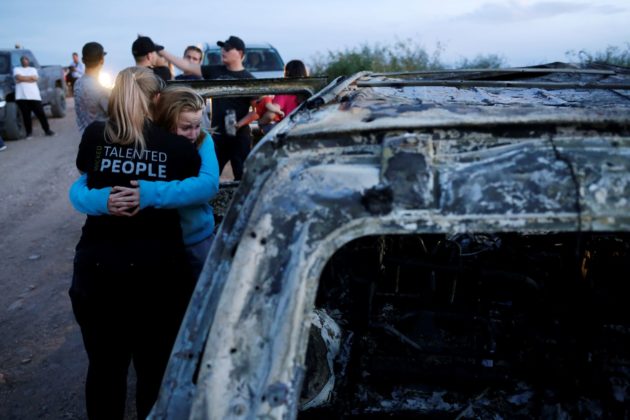 BAVISPE, Mexico (Reuters) – After watching gunmen shoot dead his mother and two brothers, 13-year-old Devin Langford hid six surviving siblings in nearby bushes and walked for miles in a rugged expanse of northern Mexico to get help.

The harrowing account was given by members of three Mexican-American Mormon families that suffered a brutal attack by suspected drug cartel hitmen on Monday which claimed the lives of three women and six children and sparked outrage and condemnation in the United States.

The families, members of breakaway Mormon communities that settled in northern Mexico decades ago, were set upon as they drove along a remote dirt road in Sonora state.

Following the attack, Devin, who was uninjured, set off alone in rough, mountainous terrain, walking 14 miles (23 km) to look for help, the families said in a statement.

“After witnessing his mother and brothers being shot dead, Dawna (Langford)’s son Devin hid his six other siblings in the bushes and covered them with branches to keep them safe while he went for help,” the account states. For 11 hours, the relatives had no idea about what had happened to their loved ones.

The three mothers and 14 children were in three vehicles that left from a small village in Sonora to meet with relatives in neighboring Chihuahua state and Phoenix, Arizona.

The murders sparked immediate calls from U.S. President Donald Trump for Mexico to join forces with the United States to crack down on drug gangs amid mounting concerns over security after a string of mass killings in the past few weeks.

On the defensive, Mexico has countered by urging the U.S. government to help stop the flow of arms south of the border.

“That’s one of the most relevant details we can give you,” he told reporters at a news conference on Wednesday.

No official explanation has been given for the killings, though the Mexican government said the victims may have been caught in the crossfire of a bloody turf war between an arm of the Sinaloa Cartel and its rival, the Juarez Cartel.

Relatives of the dead have dismissed the notion that the women and children could have been targeted due to mistaken identity in a shooting spree that authorities said left more than 200 military-grade shell casings behind.

The mothers of the Langford, Miller and Johnson families were driving separate SUVs when the gunmen opened fire. All three mothers lost their lives in the slaughter.

The youngest of Devin’s siblings, 9-month old Oliver, was shot in the chest; 8-year-old Cody had bullet wounds to the jaw and the leg, while Xander, 4, had been hit in the back. Brothers Trevor, 11, and Rogan, 2, lay dead.

When Devin failed to return, his 9-year-old sister Mckenzie, who was grazed in the arm, went after him and walked 10 miles before getting lost in the dark. Search parties later found her, the families said. Another sister, Kylie, was shot in the foot, while sibling Ryder was uninjured.

Nearby, the attack on the vehicle transporting the Miller family had claimed five lives; mother Rhonita, and four children, including 8-month old twins Titus and Tiana.

“All shot and burned in their vehicle,” the families’ statement said. “Only ashes and a few bones remain.”